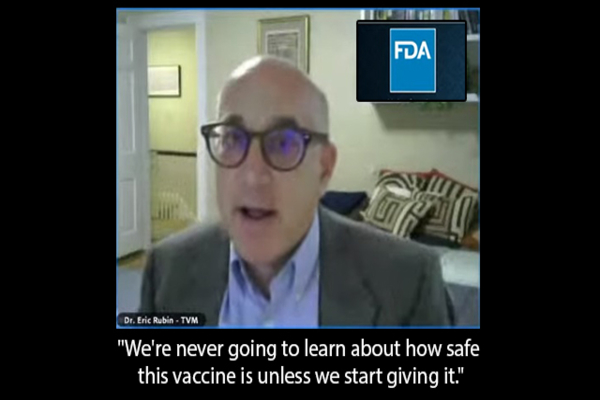 (IL) – An FDA vaccine advisory panel on Tuesday voted unanimously 17-0 in favor shooting up kids aged 5-11 with Pfizer’s experimental mRNA injection with panelist Dr Eric Rubin stating, “we’re never going to learn about how safe this vaccine is unless we start giving it.”

“We’re never going to learn about how safe this vaccine is unless we start giving it,” Dr Rubin said, urging other panelists to vote for it. “That’s just the way it goes.”

The panel voted in favor of experimenting on tens of millions of helpless children with zero long-term data on side effects because 94 children between 5 and 11 have died with COVID-19 (they claimed “of”) and “all have names. All of them had mothers,” to quote the emotional gobbledegook uttered by panelist Patrick S. Moore.

“To me, it seems that it is a hard decision but a clear one,” said Patrick S. Moore, a University of Pittsburgh microbiologist and committee member. He noted that 94 children between 5 and 11 have died of covid-19, and “all have names. All of them had mothers.”

The same FDA panel approved the rollout of boosters earlier this month based off “gut feeling” rather than data.

As the WSJ reported:

Members of the FDA’s vaccine-advisory panel supported Moderna’s booster dose even though the evidence for it was from a small study and had mixed results.

“It’s more a gut feeling rather than based on really truly serious data,” said Patrick Moore, a member of the committee and a professor of molecular genetics and biochemistry at the University of Pittsburgh School of Medicine. “The data itself is not strong, but it is certainly going in the direction that is supportive of this vote.”