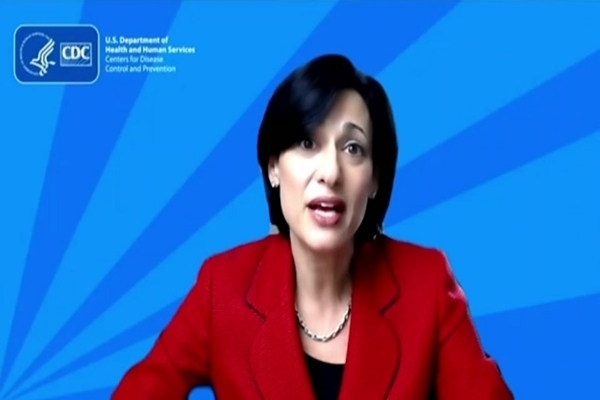 (informationliberation) – CDC Director Rochelle Walensky is urging “pregnant people” to take Big Pharma’s experimental jabs as she claims there is “currently” no evidence the shots cause fertility issues.

The various covid-19 shots have only been out for about eight months.

According to the CDC, new data on 2,500 women “showed no increased risks of miscarriage for those who received at least one dose of the Pfizer or Moderna vaccine before 20 weeks of pregnancy,” Newsweek reported.

“The analysis found the miscarriage rate to be around 13 percent, within the normal range.”

They have no long-term data on these shots as they haven’t been around long enough to see the health effects on kids but that’s not stopping Walensky from aggressively pushing them on everyone.

“The rise in cases, vaccine hesitancy, and the increased risk of severe illness for pregnant people make vaccination against #COVID19 more urgent than ever,” Walensky, who was just caught manipulating figures to wildly overstate vaccine efficacy, said.

“Evidence suggests that the benefits of receiving a #COVID19 vaccine during pregnancy outweighs any known or potential risks and vaccination is essential to protect pregnant people,” she said.

Last week, CDC Director Rochelle Walensky was forced to admit during a press briefing that her claim that over 99% of covid patients dying in hospitals were unvaccinated was a load of crap.

The claim, which was also echoed by Anthony Fauci, Surgeon General Vivek Murthy and other top officials, was shown to be a lie by the CDC’s own data released by the Washington Post on July 29.

The CDC’s data showed the number of covid patient in-hospital deaths in May were 15% among the vaccinated, not 0.5% as they all claimed — which is 30x higher than they stated.

Why should anyone trust the “limited” data the CDC is putting out now to justify giving experimental injections to pregnant women when they were just caught wildly misrepresenting their data on vaccine efficacy over the past two months?