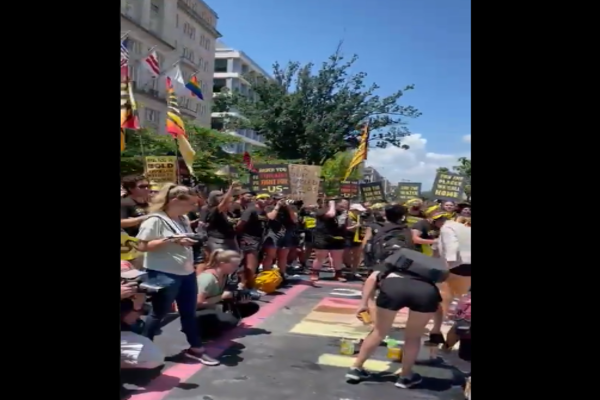 (breitbart) – A group of activists, flanked by noteworthy Democrat politicians, protested outside of the White House on Monday, demanding the Biden administration adopt an infrastructure plan that prioritizes climate change and blocking every entrance to the White House as part of their demand for action.

Activists from the far-left Soros-funded group the Sunrise Movement marched to the White House on Monday to demand the Biden administration put climate change-related initiatives at the forefront, particularly in terms of the ongoing infrastructure negotiations. According to reports, protesters are blocking every entrance to the White House, demanding Biden heed to their Green New Deal agenda:

Rep. Jamaal Bowman (D-NY) was among the radical left lawmakers who joined activists outside of the White House, demanding the Biden administration “to go big and bold and visionary for our country and for our future and for our planet”:

Reps. Alexandria Ocasio-Cortez (D-NY) and Cori Bush (D-MO) also made an appearance, embracing as the crowd of activists cheered.

“What we are here to tell them is that you can’t break this promise to us anymore,” Ocasio-Cortez told the invigorated crowd. “They’re setting up a world that they won’t have to live in. Ok, that’s why this matters. That’s why we fight.”

“We have seen dangerous heat events obliterating the northwest in record numbers, and we see that it’s coming up again over the next few days in places where they don’t even have AC,” Rep. Bush said at the event, bringing up other natural disasters such as flooding events in the midwest.

“People are suffering. People are dying because of our problem that society created. Society created the problem, and so society has to fix it,” she added:

The Progressive Caucus appeared to endorse the movement, praising activists for making it clear that lawmakers must “go big, bold, and fast to fight the climate crisis.”

“This infrastructure package must include sufficient funding for climate. There is no time to waste,” the group added:

Her remarks prompted an internal revolt from vulnerable Democrats, and Senate Republicans have warned that the far-left tactics embraced by both Pelosi and President Biden, who is also demanding measures focusing on human infrastructure,  could very well blow up the bipartisan negotiations.

House Republican Whip Steve Scalise (R-LA) blasted the far-left demands of his Democrat colleagues, including their desire to thrust climate change initiatives to the forefront of these measures.

Oh, the idea that they were going to try to use an infrastructure bill to bring forward more social programs and Green New Deal initiatives that would kill jobs and unionizing home health care workers, I think the public revolted against that kind of abuse of power, and it’s one of the reasons that they haven’t been able to bring forward their radical spending and taxing bill.

“So hopefully, the public stays engaged on this, and we get something that’s more rooted in common sense than radical socialist ideas,” he added.