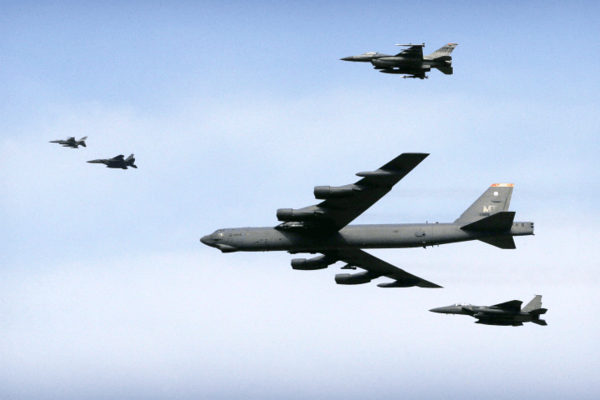 (breitbart) – A senior Iranian military commander warned Sunday that U.S. Air Force B-52 bombers in the Persian Gulf will meet a “crushing and fiery response” if they dare to venture near Iran airspace.

“The country’s airspace is among our redlines and, as enemies have experienced in the past too, the smallest violation will be met with the (Iranian) air defense forces’ crushing and fiery response,” the Iranian commander said.

As Breitbart News reported, a pair of U.S. B-52H Stratofortresses flew a show-of-force mission across the Persian Gulf on Thursday in a display intended to deter attacks from Iran.

The New York Times says the bombers flew over the Middle East alongside aircraft from Qatar, Saudi Arabia, and Bahrain. These were likely fighter jets, as all three countries maintain sizable inventories of American fighters, particularly F-15 Eagle and F-16 Fighting Falcon fighters.

The B-52H bomber has a range of 8,800 miles, and the return trip itself was about 17,000 miles. That means the two bombers would have had to refuel at least three times during the trip, though four times is more likely due to the crossing of the Atlantic.

Rahimzadeh said Iran’s integrated air defense monitors the movements of manned and unmanned aircraft around the country meant the B-52s would stand no chance against the bravery of the Islamic republic’s soldiers and weaponary.

“The air defense analyzes these movements, and devises and implements proportional plans after learning about the enemies’ (potential) targets and behavior,” he added.

U.S. Air Force B-52 bombers were last ordered to the region 12 months ago to counter unspecified threats from Iran.

Officially nicknamed the Stratofortress and informally known as the Big Ugly Fat Fellow, the B-52 featured heavily in the air war over Vietnam.