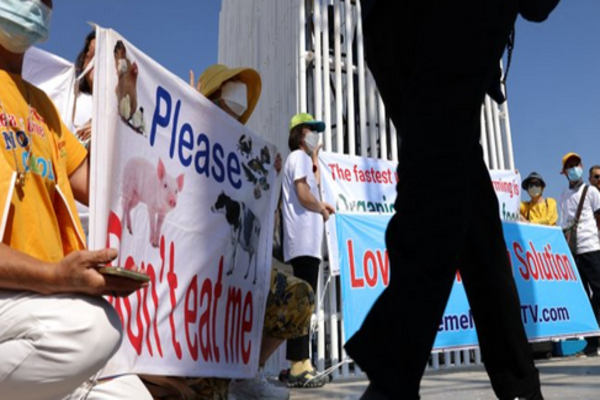 (breitbart) – The European Union has given the green light for two more species of insect to be used as food for humans.

As of Tuesday, a powdered form of Acheta domesticus — better known as the house cricket — will be given the green light for human consumption within the European Union, documents from the body have confirmed.

This is soon to be followed by further approval for the sale and consumption of the larval form of Alphitobius diaperionus — also known as the lesser mealworm — which will be given the green light for human consumption in frozen, paste, dried and powder forms within the European Union later this week.

The new insect-based products for human consumption represent the latest push by the European Union to normalise the consumption of bugs through legislation, with many bigwigs from a variety of organisations pushing insects as a food item for both economic and environmental reasons in recent years.

In a press release confirming the approval of the insect products, the EU emphasises that while it is “up to consumers to decide whether they want to eat insects or not”, the bug-based food can serve as an “alternate source of protein”, with the bloc being keen the emphasise that many bugs are already eaten in other parts of the world.

The union also emphasises that both approved products “are safe under the uses and use levels” and “do not pose any risk to human health” so long as they are produced and consumed as outlined as provided for by the bloc.

“Food safety is the top priority for the commission,” Der Spiegel reports a spokesman for the European Commission in relation to the approval.

Global elites have been keen to move western populations away from meat eating over the last number of years, with the topic once again receiving attention at the World Economic Forum’s annual conference at Davos earlier this month.

“If a billion people stop eating meat, I tell you, it has a big impact,” Jim Hagemann Snabe, the chairman of German manufacturer Siemens, remarked during a panel on climate change at the conference.

“I predict we will have proteins not coming from meat in the future, they will probably taste even better,” he continued. “They will be zero carbon and much healthier than the kind of food we eat today, that is the mission we need to get on.”

Many national institutions have gotten on board with this move away from meat, with schools in the Netherlands even going so far as to feed children mealworms last year in the hopes of opening them up to it as an alternative source of protein.

However, such a push does not appear to be to the taste of all involved, with many within elite globalist spheres seemingly keen on holding on to their own meat-eating habits despite an attempt to move middle-income workers away from the food type.

For instance, high-class meals containing beef, chicken and salmon were all served at the U.N.’s COP27 climate conference in Egypt last year, despite the fact that the international body has been pushing for a transition to alternative protein sources.

“Meat analogues such as imitation meat (from plant products), cultured meat, and insects may help in the transition to more healthy and sustainable diets,” a report published by the U.N. back in 2018 read.