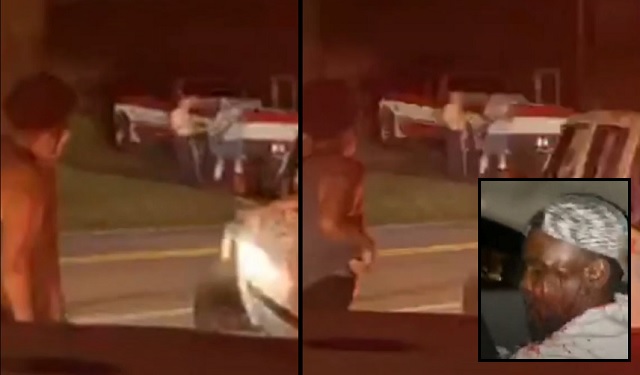 (informationliberation) – Black Lives Matter “protesters” armed with handguns were shot at by a homeowner reportedly in Bedford County, Pennsylvania on Monday night while marching through a neighborhood at night.

One of the “protesters” was allegedly hit in the face with some buckshot (or birdshot) but appeared to be in decent shape.

You can see the man’s injury for a second in this longer video from activist Frank “Nitty” Sensabaugh.

Leftists are claiming these “peaceful protesters” were shot for no reason but it’s rather odd how members of Nitty’s crew are heard repeatedly screaming, “Turn the camera off! Turn the camera off!” and “Don’t show his face!” to try and hide the identity of the alleged victim.

(Someone in a second video says, “C-No’s bleeding.”)

Was this “protester” armed? Did he threaten the homeowner or commit a crime which would make the homeowner’s actions a clear-cut case of self-defense?

One fellow “protester” in Nitty’s crew can clearly be heard shouting, “Where the f**k is my gun at?”

Another “protester” can be seen reaching for his waistband and grabbing what appears to be a gun after the first round of shots were fired.

The media is claiming this protest was part of a march organized from Milwaukee to DC but you can clearly see in the video everyone gets back into their cars after being fired at.

Additionally, it’s totally illegal to march into DC while carrying a pistol. You need a permit just to own a pistol in Maryland and it can take a while just to get the paperwork approved. Pennsylvania requires a License to Carry Firearms (LTCF) to have a gun in your car.

We’re not being told the full story here.

Nitty filmed himself antagonizing another homeowner in Akron, Ohio last week by repeatedly shouting “Black Lives Matter, white boy” and telling him, “We know where you live!”

These agitators were looking for a confrontation and they found it.

UPDATE: Here are the source videos. Neither capture much of the run-up to the first shooting.

UPDATE II: “Pennsylvania State Police say the two residents are being questioned,” the AP reported Tuesday afternoon. “Nobody has been arrested at this time.”

If you know these homeowners, please send them this article and tell them to get in contact with a lawyer and prepare themselves with a proper legal defense just like the McCloskeys.