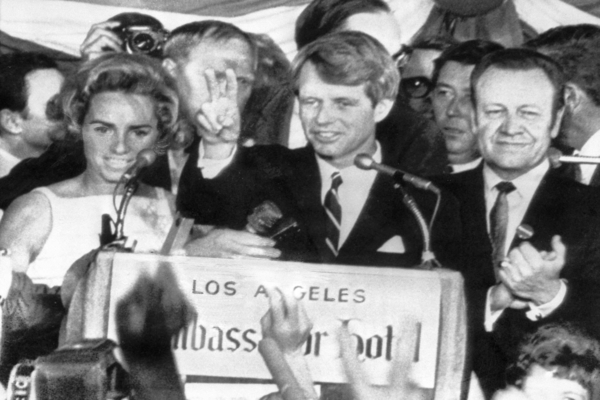 (breitbart) – A parole board in California voted Friday in favor of the release of Sirhan Sirhan, the Palestinian immigrant who was convicted of assassinating presidential candidate Robert F. Kennedy in 1968, shortly after he won the Democratic primary.

U.S. Sen. Robert F. Kennedy holds two fingers up in a victory sign as he talks to campaign workers at the Ambassador Hotel in Los Angeles, Ca., June 5, 1968. He is flanked by his wife Ethel, left, and his California campaign manager, Jesse Unruh, speaker of the California Assembly. After making the speech, Kennedy left the platform and was assassinated in an adjacent room. (AP Photo)

Sirhan Sirhan later said that he had resented Kennedy partly because of his support for Israel. He shouted that he had killed Kennedy “for my country” at the scene of the crime.

Sirhan Sirhan’s parole request succeeded on the 16th try, thanks in part to the decision of George Soros-based Los Angeles County District Attorney George Gascón not to oppose his parole application.

A California parole board panel on Friday voted in favor of Sirhan B. Sirhan’s request for release from prison on parole, 53 years after he was arrested and convicted of the assassination of Sen. Robert F. Kennedy, finding that he was no longer a threat to society, according to Sirhan’s brother, one of Kennedy’s sons and one of Sirhan’s surviving victims.

The slaying of Kennedy (D-N.Y.), then a contender for the Democratic presidential nomination, likely changed the course of American history. But Sirhan’s lawyer argued that was an irrelevant consideration for parole — that the criteria of rehabilitation, remorse and future dangerousness applied to all prisoners should also be applied to Sirhan, now 77.

It was Sirhan’s 16th parole hearing. Since California abolished capital punishment in 1972, and Sirhan’s sentence was reduced to life, he has been eligible for release since 1975. The decision by the two-person panel will be reviewed by the full parole board for 90 days before it is final. Then the California governor, currently Gavin Newsom (D) who is facing a recall election which ends on Sept. 14, will have 30 days to uphold the decision, reverse it, or send it back to the board.

As Breitbart News noted earlier this week, the murder shocked the world, given the fact that Kennedy’s brother, President John F. Kennedy, had been killed five years before, and the fact that Dr. Martin Luther King, Jr., had been assassinated in Memphis, Tennessee, just two months before, throwing the nation into turmoil.

The Kennedy family supported the parole.

Sirhan Sirhan is not a U.S. citizen and theoretically could face deportation to the Middle East if he is released from prison.

Joel B. Pollak is Senior Editor-at-Large at Breitbart News and the host of Breitbart News Sunday on Sirius XM Patriot on Sunday evenings from 7 p.m. to 10 p.m. ET (4 p.m. to 7 p.m. PT). He is the author of the recent e-book, Neither Free nor Fair: The 2020 U.S. Presidential Election. His recent book, RED NOVEMBER, tells the story of the 2020 Democratic presidential primary from a conservative perspective. He is a winner of the 2018 Robert Novak Journalism Alumni Fellowship. Follow him on Twitter at