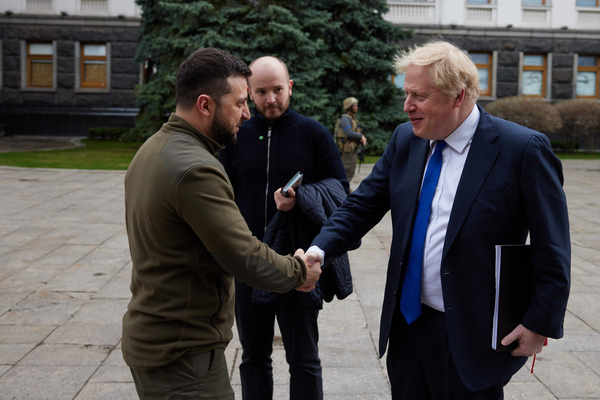 (breitbart) – The visit Saturday of British Prime Minister Boris Johnson to Kyiv, the capital of Ukraine, was a sharp contrast with the refusal of U.S. President Joe Biden to visit last month, when he decided to confine a regional visit to neighboring Poland.

At the time, as Breitbart News reported, Biden told reporters that “they” would not let him go to Ukraine on his Europe trip:

President Joe Biden expressed regret Friday that his handlers would not let him travel into Ukraine to see firsthand the damage done by Russia.

“Quite frankly, part of my disappointment is that I can’t see it firsthand, like I have in other places,” Biden said during a visit to Poland. “They will not let me, understandably; I guess it would cross the border — and take a look at what’s going on in Ukraine.”

Biden’s advisers hailed his speech in Warsaw as a moment of great courage, but it pales in comparison to Johnson’s visit.

There were mixed opinions in the U.S. as to whether Biden should visit Kyiv. Some considered it too risky for the President of the United States, nominally the leader of the free world, to visit a war zone. A Russian attack, even in error, could have forced the U.S. to make a difficult decision about whether to respond and to enter a war from which it has kept a distance. The military situation in Kyiv was also more unsafe two weeks ago during Biden’s visit than it was during Johnson’s visit.

There is also the point that Biden has yet to visit the U.S. southern border, currently being overrun by illegal migrants.

At the same time, the symbolic importance of having a U.S. president visit the capital of Ukraine would have shown strength and resolve, and reinforced principles of freedom, liberty, and national sovereignty that the U.S. has historically defended.

Given NATO’s treaty obligation to come to the aid of any member state if attacked, Johnson’s visit could just as easily have involved the U.S. if a Russian sniper or artillery unit had targeted the British Prime Minister on his visit to the capital city.

And Biden nearly launched World War III in any case with a throwaway remark at the end of his Warsaw speech indicating that he wished to see Russian President Vladimir Putin removed from power — a remark the White House had to walk back.

The fact that Johnson was willing to take the risk, and that Biden was not, suggests that the leadership of the free world has slipped from the White House. Others — such as Ukrainian President Volodymyr Zelensky — are doing more to confront what President Donald Trump, in his own Warsaw speech, called “the powers that seek to test our will, undermine our confidence, and challenge our interests” in the West.

Whether from policy choice or personal frailty, Biden has created a vacuum in the leadership of the free world.