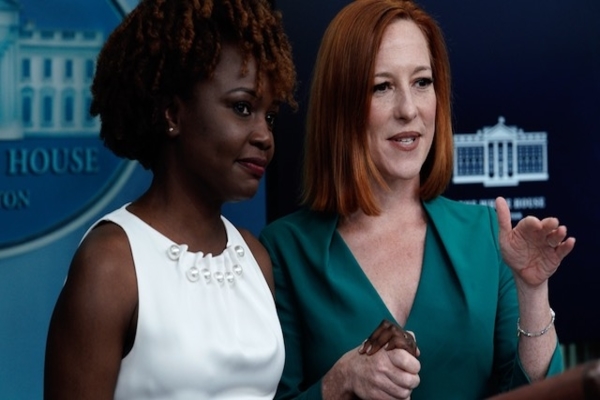 (breitbart) – Karine Jean-Pierre held her first briefing as America’s new press secretary on Monday and melted down into a word blob over two fairly straightforward questions.

“I am a black, gay, immigrant woman. The first of all three of those to hold this position,” Jean-Pierre announced to the press corps Monday. Well, no one of any substance gives a shit about any of that. What we’re mostly interested in is “qualified,” and on that particular virtue, the jury is still out.

Last week, His Fraudulency Joe Biden fired off a ridiculous tweet that claimed (falsely) that raising corporate taxes reduces inflation. It was such a laughable non-sequitur, such a blatant piece of disinformation, that former Amazon CEO Jeff Bezos pointed and laughed at it.

Considering all the attention around Biden’s tweet and Bezos’ response, you’d think our new press secretary would have prepared to answer the following question from Fox’s Peter Doocy: “How does raising taxes on corporations lower the cost of gas, the cost of a used car, the cost of food, for everyday Americans?”

Jean-Pierre’s response was so painful to watch, you might want to break it into a few parts…

For the lulz, here’s the transcript, and I swear it’s not the Q&A from a local beauty pageant…

JEAN-PIERRE: Well, look, I think [reads briefing book] we encourage those who have done very well, especially those who care about climate change [which is a hoax] to support a fairer tax code that doesn’t change — that doesn’t charge manufacturers, workers, cops, builders a higher percentage of their earnings, that the most fortunate people in our nation, and not let that stand in the way of reducing energy costs and fighting this existential problem. If you think about that as an example. And to support basic collective bargaining rights, as well, right? That’s also important. But look, it is — by not — without having a fairer tax code, which is what I’m talking about, then, all, everything, manufacturing workers, cops, you know, it’s not fair for them to have to pay higher taxes then the folks who are, who are not paying taxes at all.

DOOCY: But what does that have to do with inflation? The president said ‘you want to bring down inflation, let’s make sure the wealthiest corporations pay their fair share.’ Jeff Bezos came out and tweeted that the President’s newly created Disinformation Board should review this tweet. Would you be okay with that?

In Miss Cherry Blossom’s defense, there was no way to answer Doocy’s question. Raising taxes does not decrease inflation. In fact, raising taxes increases inflation. If you raise taxes on corporations, they pass those taxes on to us in the form of higher prices (i.e., inflation) as the cost of doing business goes up.

Nevertheless, Jean-Pierre should have been prepared for this question and should have known it was coming. Obviously, not from any of the other losers in the butt-kissing press corps, but at least from Doocy.

Anyway, Doocy gave up on that one and followed up with another question that melted down Miss Cherry Blossom…

DOOCY: How come the President is visiting Buffalo after a senseless tragedy there, but he couldn’t visit Waukesha after six were killed and 61 injured in an attack on a Christmas parade there?

JEAN-PIERRE:  I mean, he’s visited many communities. Buffalo — he was — we — you know, he was — he’s able to go tomorrow to Buffalo, ah, ha, before the trip. That is something that was important for him to do. But he has visited many — many other communities. This is not — Buffalo is not the first community, sadly, that he has to go up to because of a violent attack. So, you know, that’s not — that’s not the first one. So he’s been to many others, sadly.

We all know why Biden ignored Waukesha and is demagoguing about Buffalo. Democrats and their fascist media allies couldn’t blame Republicans for Waukesha, a massacre involving a black suspect who appears to have deliberately targeted white people. There’s no political upside in Waukesha, so Democrats and the media dropped it. With the massacre in Buffalo, these fascists can try to blame and silence their critics.

Miss Cherry Blossom’s first impression was straight out of a sitcom.