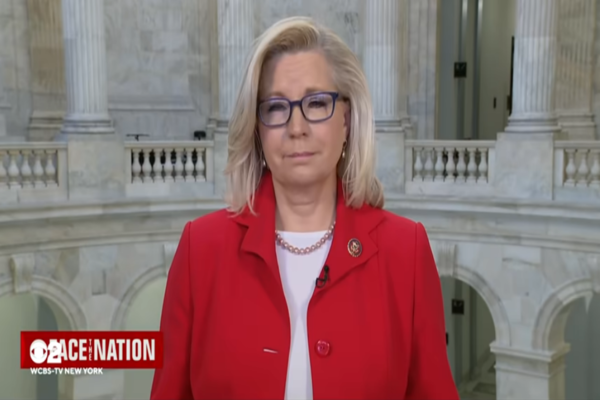 Representative Liz Cheney (R-WY) said Sunday on CBS’s “Face the Nation” that Republicans had to choose between loyalty to former President Donald Trump or the U.S. Constitution because she claimed that they could not do both.

BRENNAN: That assumes facts can actually persuade. What happens with this committee if Republicans take the majority in 2022? Have you asked Kevin McCarthy to keep it?

CHENEY: Look, Leader McCarthy has said a variety of things. He has both acted to obstruct the operations of the committee, but he’s also, on a couple of occasions, said that he’s willing to come talk to the committee. I think that the- the American people again and particularly the Republican Party, you know, we as Republicans, have a choice to make. I am a conservative Republican. I believe strongly in the policies of low taxes and limited government and a strong national defense. I think the country needs a strong Republican Party going forward, but our party has to choose. We can either be loyal to Donald Trump or we can be loyal to the Constitution, but we cannot be both. And right now, there are far too many Republicans who are trying to enable the former president, embrace the former president. Look the other way and hope that the former president goes away, trying to obstruct the activities of this committee. But we won’t be deterred. At the end of the day, the facts matter, and the truth matters.

BRENNAN: It goes beyond the former president, in a number of state capitals around the country in 19 different states, election laws are being changed and in some there is concern that Republican controlled legislatures could be able to change certification of an election if they don’t like the outcome of it. This is undermining confidence among some in the public about the integrity of our elections. Would you ask your fellow Republicans in states around the country to stop trying to do that?

CHENEY: Absolutely. I think that again, you know, as a nation, we’ve got to be founded on the rule of law. We’ve got to be founded on fidelity to the Constitution. And when you look at what former President Trump continues to do to this day in terms of trying to undermine our belief in our democratic process, in terms of trying to undermine the rule of law, in terms of trying to find local officials who will help him do that. One of the really important lessons we learned on January 6th was how important it was that we had a few individuals who stood up. We had individuals at the Department of Justice before Jan. 6 who stood up to the president who said, absolutely not, we will not claim that this election was stolen, who told him the truth. And we had local officials in the party, the Republican Party, who did the same. And so, I think for people all across the country, they need to recognize how important their vote is, how important their voice is. They’ve got to elect serious people who are going to defend the Constitution, not simply do the bidding of Donald Trump.