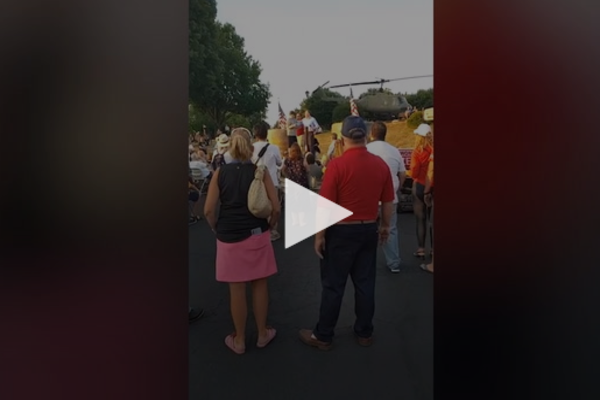 (breitbart) – Rep. Lee Zeldin, the Republican nominee for governor of New York, was reportedly attacked at a campaign stop in Fairport, New York, by a man with a weapon on Thursday evening.

According to local news outlets:

They say Zeldin was giving a speech at the VFW on Macedon Center Road when a man got on stage, started yelling, “wrestled with him a bit, and pulled a blade out.” The alleged attacker was suppressed by AMVETS national Director Joe Chenelly.

The attacker climbed on stage while Zeldin was speaking, but the GOP nominee grabbed the attacker by the wrist and stopped him until several others assisted, according to Zeldin’s campaign. A video showing the attacker climbing onto the stage was posted to Twitter by witnesses shortly after it occurred.

Photos from the attack showed the attacker reportedly used a sharp weapon with holes for gripping purposes.

The same attendee said that Zeldin retook the stage and finished his speech “once everything calmed down.”

The Associated Press reports New York GOP Chair Nick Langworthy said Zeldin was “not seriously injured” and he “did not have any details on the attacker.”

Zeldin campaign spokesperson Katie Vincentz pointed to the attack as an example of the “out of control crime and violence in New York.”

Congressman Zeldin, Alison Esposito and all members of Team Zeldin are safe following tonight’s attack. Far more must be done to make New York safe again. This is very much getting out of hand in this state. Unfortunately, Congressman Zeldin is just the latest New Yorker whose life has been affected by the out of control crime and violence in New York. This needs to stop! Thankfully, we still have exceptional men and women in law enforcement answering the call to protect our streets.

Tonight, Congressman Zeldin was targeted in a violent attack at a campaign rally stop in Monroe County. Thanks to the swift action of several brave eventgoers, the perpetrator was subdued. Congressman Zeldin and all of the attendees are safe, but this could have ended much worse. It’s not a coincidence that just hours earlier, Kathy Hochul fanned the flames of hate by directing her supporters to his rally schedule. This is unacceptable conduct for anyone, let alone a sitting governor. It’s not enough to condemn the attack, she must apologize and tone down her hateful rhetoric immediately.

“You sent your supporters after him. And they came,” Schwartz tweeted.

“‘Big Lie’ Lee and his entourage of extremists kick off the statewide ‘MAGA Republican’ Bus Tour, which will make stops across the state peddling dangerous lies, misinformation, and his far-right agenda,” Hochul’s release read.

In a statement after the failed attack on Zeldin, Hochul said that violent behavior has “no place in New York.”

“My team has informed me about the incident at Lee Zeldin’s campaign event tonight. Relieved to hear that Congressman Zeldin was not injured and that the suspect is in custody. I condemn this violent behavior in the strongest terms possible — it has no place in New York,” Hochul tweeted.