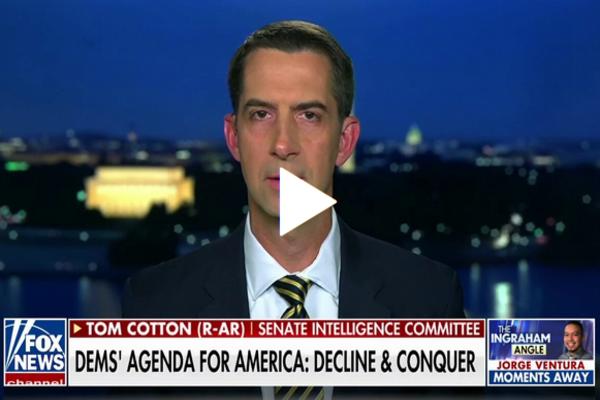 (breitbart) – During an appearance on FNC’s “The Ingraham Angle,” Sen. Tom Cotton (R-AR) argued the current struggles of the American economy were “by design.”

According to the Arkansas Republican lawmaker, the effort went back to the last century, noting the track record of progressives and Democrats in weakening U.S. standing in the world.

“[W]hat you see is decline by design,” he said. “The left has a 100-year plan to try to weaken the sources of American power. It goes back as you said, to Woodrow Wilson and the progressives’ attack on our declaration, our Constitution, and the moral foundation of our country. And it was not a very far slide into the 1960s and 70s when you had the radical blame America first Democrats, and today’s left is acting in their shadow. This is exactly what the Democrats wanted. Why is inflation up 13 percent? Why does gas costs $4 to $5 a gallon? Why are you having trouble paying your utility bills? Why are your food bills so high? It’s because Joe Biden and other Democrats promised to eliminate fossil fuels, the source of so much of our prosperity, prosperity, it literally powers our economy.”

“Why do we have 5 million illegal aliens entering this country in the last two years because Joe Biden, Kamala Harris, and all those other Democrats promise to open our border?” Cotton continued. “Why did the Democrats consistently, from Carter to Clinton to Obama to Biden, weaken our Military in their office, constrained us with crazy international treaties and bureaucracies is because they don’t want a strong, sovereign America leading the free world. These are not things that are accidents. They’re not mishaps. They’re not bad luck or misfortune. This is their deliberate choices. They want to weaken the source of American power because they think a strong America is bad for our country, and more importantly, their eyes bad for the world.”