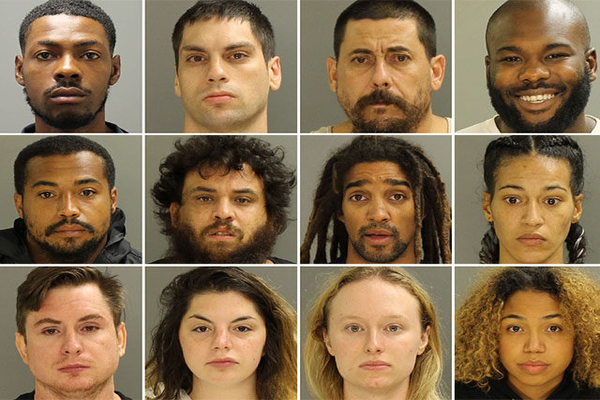 (breitbart) – Authorities arrested 13 individuals in connection to the riots in Lancaster, Pennsylvania, after rioters took to the streets of the city — smashing county vehicles and hurling various projectiles at officers — following Sunday’s police-involved shooting of a man who chased an officer with a knife in hand.

Violent rioters faced off with authorities in Lancaster Sunday night into early Monday morning, setting fires, hurling bricks and rocks at the police station, and damaging county vehicles, as several videos show. As a result, police arrested 13 individuals — 12 adults and one juvenile. Charges include “Criminal Conspiracy for Arson, Riot, Institutional Vandalism, Failure to Disperse, Obstructing Highways and Other Public Passages, Disorderly Conduct and Defiant Trespass,” according to the Lancaster Bureau of Police:

Officers made a total of (8) arrests ( The updated total is 12 adults and 1 juvenile ) related to the arson/riot outside of the Police station. The arrests were made at approximately 0300 hrs. and shortly thereafter. All suspects arrested were transported to the Lancaster Bureau of Police station for processing and to be held for arraignment. (4) of the (8) suspects are from outside of Lancaster County. (2) of the suspects were armed with handguns during the protest and riot. Those handguns were recovered by Officers after the arrests. (Only Montague was charged with an offense related to illegal possession of firearm)

According to the bureau’s update:

According to police, “Newman was on probation at the time of his arrest and a detainer will lodged against him.” He was also armed with a handgun during the riot, but police noted that it was “carried/displayed in a lawfully prescribed manner.”

He is being held on $1,000,000 bail, as are several other arrestees, including Barry Jones, 30, who is facing charges of “Arson (F1), Institutional Vandalism (F3), Riot (F3), Failure to Disperse (M2), Obstructing Highways and Other Public Passages (M3), Disorderly Conduct (M3) and Defiant Trespass (M3).”