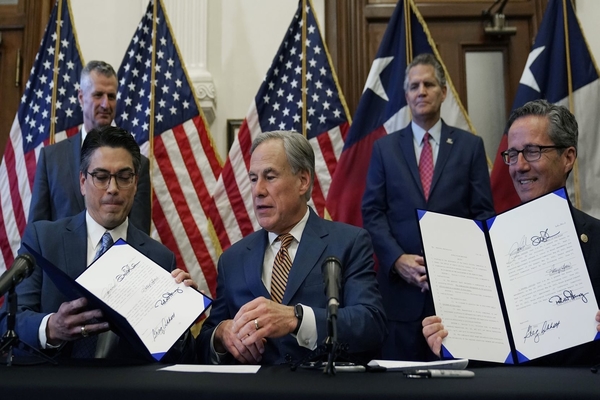 Abbott said Texas will immediately begin construction of border barriers in areas like Del Rio where migrants can easily cross unsecured sections of the border with Mexico. The governor picked Del Rio for the Border Summit due to the massive increases in illegal border crossings in this region. Del Rio Sector agents apprehended 27,890 migrants — a 1,118 percent increase over the May 2020 report of 2,289, Breitbart Texas reported on Thursday.

He said they are hearing from local residents and elected and law enforcement officials that they are seeing things they have never seen before.

“They’re seeing a lot of very bad dangerous people come across the border,” Abbott continued. “People that they are afraid of encountering, people who are causing damage to their fences, their livestock, their crops, their neighborhoods, and their homes.”

“Bad things are happening around here, and so they need help from the state to help them address this exploding crisis.”

The governor said authorities will use existing state laws along with the authority of the State of Emergency declaration made earlier this month to crack down on those illegally crossing the border can creating havoc along the way.

“What people have seen in videos across the country seems to be the Biden Administration welcoming these people to the United States,” Abbott stated. “We won’t be sending that message.”

“We want to be very aggressive in working with local officials and begin making mass arrests,” Abbott stated. “In working in collaboration with a large number of counties — that means we’re going to be arresting a lot more people.”

The governor said this will create the need across the state for a lot more jails.

The governor explained that the barriers serve two functions in the battle against illegal border crossings. The first being physical deterrence. The second, “If they (migrants) move or interfere with that barrier, they have committed several crimes.”

Those crimes include criminal mischief, vandalism of state property or local government property, and criminal trespass.

In addition, the recent declaration of a State of Emergency by the State of Texas causes the penalties for these crimes to increase by one level.

“That means up to 180 days in jail,” Abbott continued. “Something that may be a Class B misdemeanor right now, turned into a class A misdemeanor. And so they can get into a lot of trouble.”

“There’s even potential for state jail felonies for some of these crimes,” he explained. “So they can wind up in jail for a long time.”

Abbott said they have identified more than 1,000 jail cells that can be used to hold arrested migrants. They will begin actively working with local and state officials to identify more space. He said they may consider building additional jail space in the form of soft-sided facilities.

To help facilitate this effort, Governor Abbott teamed up with Arizona Governor Doug Ducey to call on fellow governors across the nation to provide assistance in the ongoing border crisis.

“With your help, we can apprehend more of these perpetrators of state and federal crimes before they can cause problems in your state,” the two governors advised. “Texas and Arizona have stepped up to secure the border in the federal government’s absence, and now, the Emergency Management Assistance Compact gives your State a chance to stand strong with us.”

Abbott said he anticipates a “high level of participation.”

Abbott concluded the one-on-one interview, saying, “Texas already has done more than any other state to secure the border, but we know that more has to be done. And we’re stepping up to undertake an unprecedented response to the border crisis caused by the federal government.”

“In the end, only the federal government and Congress can fix this, but as it stands right now, the state of Texas is going to step up and we’re going to start making arrests — sending a message to anybody thinking about coming here,  you’re not going to get a free pass to the U.S. They’re getting a straight pass to a jail cell.”