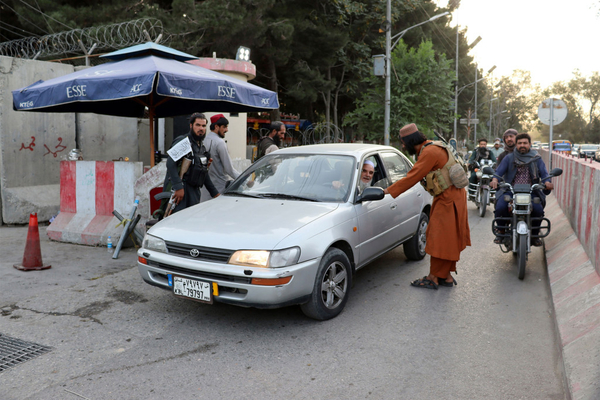 (nypost) – Members of Congress and their staffers who scrambled to help Americans and their Afghan allies get out of Afghanistan before this week’s withdrawal deadline have revealed some of the frantic messages they received from people desperate to leave in recent days.

Multiple outlets, including The Post, reported on the difficulties facing would-be evacuees who attempted to get to Kabul’s Hamid Karzai International Airport through a gauntlet of Taliban checkpoints.

Now, the messages obtained by the Washington Examiner show how fraught the situation became in the final days before the last flight left Aug. 30.

One Afghan-American who worked with the office of Rep. Don Bacon (R-Neb.) said the Islamic fundamentalist group’s fighters “were creating as much problem as they could.”

The evacuee said he made it into the airport by making a break for it during a firefight at a checkpoint on Aug. 27, the day after an ISIS-K suicide bomber killed at least 13 US service members and at least 169 Afghans at the airport’s Abbey Gate.

“I know it was stupid, but I took just my chance,” he said. “I ran towards the soldiers. I had my passport in my hand — shouting that I’m an American citizen.” The man is back in the US, along with his wife and their four children.

The Examiner reports that lawmakers, staffers and would-be evacuees found that the Taliban did not want to let Afghan-Americans through the checkpoints, even when people brandished their dark-blue US passports.

One Afghan-American woman sent the office of Rep. Mike Garcia (R-Calif.) a video of her sitting in a car at a checkpoint, holding her children’s passports and asking what she can do.

“This is why you don’t rely on the Taliban to be the ones monitoring the checkpoints,” Garcia told the Examiner.

The Biden administration has repeatedly portrayed the Taliban as an equal partner in the evacuation operation. State Department officials stated that the Taliban had guaranteed safe passage to anyone who wished to leave Afghanistan, despite widespread reporting that people who attempted to cross the checkpoints were being assaulted and beaten.

On Monday, US Central Command commander Gen. Kenneth “Frank” McKenzie — who reportedly turned down an offer from the Taliban that would have allowed the US military to secure Kabul in the final weeks before the withdrawal deadline — described the Taliban’s conduct as “very pragmatic and very businesslike” in helping to secure the facility.

That may have been news to one American who contacted Bacon’s deputy chief of staff, Felix Ungerman, while trying to reach the airport. At one point, a Taliban militant opened fire.

“He goes, ‘Oh my god, he’s shooting.’ And I said, ‘Please get away from there, go get to safety,’” Ungerman recalled to the Examiner. “His phone cut off while I could hear gunshots going off, and I couldn’t get in touch with him again. I tried calling his cellphone every couple of hours to see if I could get him, tried an email, sent him a text message. And it wasn’t until [Tuesday] morning that he actually texted me back and said, ‘Yeah, I’m OK, but now what do I do?’

“I’m like, ‘You get to somewhere safe, and you stay there until we can — our government can offer some solutions to help you.’”

In fact, Garcia claimed, his office had the most success getting people out of Afghanistan when “we weren’t necessarily beholden or waiting on the State Department.”

“In fact, all of our successes — we ended up getting roughly 97 folks out successfully — these were all folks that we were able to do so through our own channels and folks on the ground there that were supporting mostly American citizens and SIVs [Special Immigrant Visa holders] who otherwise would have been stopped by the bureaucracy, frankly, by the State Department,” he said.

Now that the withdrawal is over, the US has declined to rule out having some kind of relationship with the Taliban. On Wednesday, Gen. Mark Milley, the chairman of the Joint Chiefs of Staff, admitted it was “possible” that the US may coordinate anti-terror operations with the Taliban targeting the ISIS-K militant group.

President Biden himself, in his various remarks about the Afghanistan withdrawal, has described ISIS-K as an “enemy” of the Taliban, suggesting a common interest between Washington and Afghanistan’s new rulers.