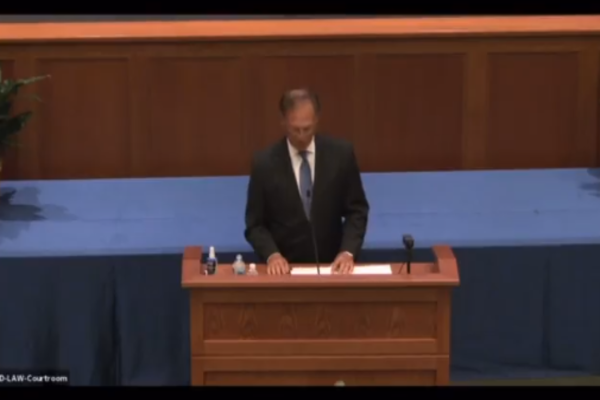 (breitbart) – U.S. Supreme Court Justice Samuel Alito hit back at the far-left The Atlantic during a speech at the University of Notre Dame on Thursday for publishing a reportedly “false and inflammatory” article about the court’s handling of the Texas Heartbeat Act.

The article, which was written by Adam Serwer and published on September 2, accused the Republican-majority Supreme Court of being “dishonest” and flouting the Constitution by declining to issue an injunction before Texas’s Heartbeat Act went into effect on September 1.

“The conservative majority on the Supreme Court was so eager to nullify Roe v. Wade, the 1973 precedent securing the right to abortion, that it didn’t even wait for oral arguments,” the article begins.

In his speech, Alito countered that the article’s claim is “flatly wrong” and “ridiculous,” and that the court’s decision did not reverse the landmark case, which added the supposed right to a “safe and legal” abortion to the constitution.

“Put aside the false and inflammatory claim that we nullified Roe v. Wade — we did no such thing and we said that expressly in our order,” Alito said.

In a rare rebuttal from a sitting Supreme Court justice, Alito quoted the court’s reasoning, which states that the decision was not about whether the new law is constitutional.

“So the statement is flatly wrong, and the suggestion that we should’ve held oral argument is ridiculous,” he continued.

The five-justice majority of Justices Clarence Thomas and Samuel Alito, and Trump-appointed Justices Neil Gorsuch, Brett Kavanaugh, and Amy Coney Barrett did not issue a published opinion with their decision. The three liberal justices, Stephen Breyer, Sonia Sotomayor, and Elena Kagan issued strongly worded dissents against the law. Typically, the Supreme Court would wait for the law’s constitutionality to be ruled upon in lower courts before it is ultimately brought before the justices.

Serwer further asserted in his article that the Supreme Court is using the “shadow docket” to make “major changes to American law without the scrutiny or attention that comes with holding oral arguments or writing major opinions.” The “shadow docket,” a term devised in 2015 by University of Chicago Law professor William Baude, is a procedure used in emergency cases which allows the court to make orders and summary decisions without oral argument, but which generally does not include published opinions, and therefore does not make binding precedent.

“The shadow docket, though, now resembles a venue where the conservative legal movement can get speedy service from its friends on the Court,” Serwer alleged.

Alito condemned this assessment as well, and said that Serwer’s rhetoric is part of a larger effort from the left attempting to intimidate the Supreme Court.

The catchy and sinister term “shadow docket” has been used to portray the court as having been captured by a dangerous cabal that resorts to sneaky and improper methods to get its ways. And this portrayal feeds unprecedented efforts to intimidate the court or damage it as an independent institution.

Serwer took to Twitter on Thursday to respond to Alito’s speech and further criticize him.

“While AS Roma is playing. Truly a shameful talisman of the court’s politicization,” Serwer claimed.

Some far-left Democrats are, in fact, keen on “packing the court” with activist judges while they hold power in every branch of the federal government. Most often, they claim they wish to add more judges as a way to ensure the court is “pro-democracy.” Radical politicians like Rep. Alexandria Ocasio-Cortez (D-NY) have even argued that the courts should not be allowed to overturn laws passed by Congress, which would abolish a central part of the Constitution’s system of checks and balances.

Republicans have long condemned the possibility of court packing. In mid-September, Sen. Mike Lee (R-UT) said that the Supreme Court in its current state of nine justices is the “central feature” of the Constitution that makes the system “unique and very valuable.”