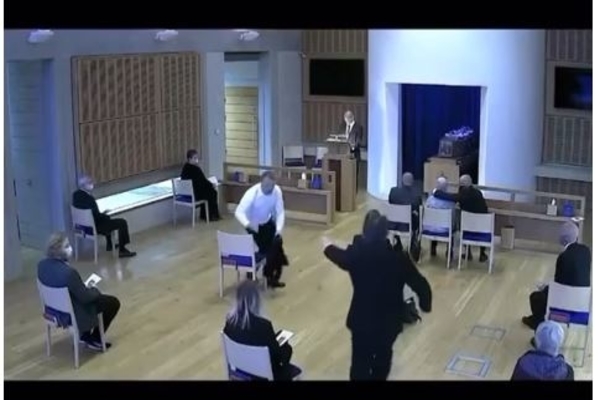 (breitbart) man was left “heartbroken” after a funeral director interrupted his father’s funeral to tell him to stop comforting his grieving elderly mother because of coronavirus social distancing rules.

Video of the socially-distanced funeral on Friday was shared on the Milton Keynes Community Hub Facebook page and showed the beginning of the service with the widow sitting just a few feet away from the coffin of Alan Wright, who had died two weeks ago of a heart attack.

As one funeral director began the service, her son, Craig Bicknell from Milton Keynes, moved his chair next to his mother’s and began to comfort her. Another man to her left moved his chair to do the same.

A few seconds later, another member of staff from Crownhill Crematorium is seen coming from the rear of the room, waving his hands and interrupting the service to say: “Sorry, sorry, you have to put the chairs back, I’m afraid.”

“You can’t move the chairs, you were told,” he scolded.

Under current coronavirus restrictions, people are not allowed to gather in groups of more than six, with some exceptions. Funerals, for example, may have up to 30 guests but all must be socially distanced (at least six feet apart).

The two men then moved their chairs back, six feet either side of the grieving woman.

One of her sons told the community Facebook page: “We are absolutely heartbroken. Me and my brother haven’t been able to leave my mum’s side for two weeks as it is, being there for my mum, within her bubble.”

The son made reference to the “support bubble”, another part of Boris Johnson’s complex social distancing rules where a lone adult in one household may be considered to be in a “bubble” with members of another. Once you have nominated your “support bubble” membership, the government mandates that it cannot be changed.

He went on to say: “I can sit in a restaurant, I can sit in a pub, I can live at her house, I can travel in a limousine to the crematorium with 6.

“I want to give my mum a cuddle at dad’s funeral, and this prick comes flying out aggressively in front of all shouting ‘stop the service’ and makes us split.

“It scared my daughter and shocked everyone in the room.”

A spokesman for Milton Keynes Council told The Sun on Monday: “We are sorry to have upset this family.

“We don’t usually step in if a guest needs to be comforted by another family member and in this instance should have taken a more considered approach.

“We ask funeral directors to let us know whether any chairs should be grouped in advance, and from now on this includes guests who are in the same household or bubbles as well as people who need extra support.

“We hope this provides additional comfort at a difficult time.”

Where the ‘rule of six’ was brought into place, a number of high-profile government minister encouraged citizens to snitch on their neighbours if they saw them break the law. One woman said in September it was her “public duty” to report to the police a funeral wake in a pub garden because she thought that people were standing too close to one another.

A report from later that month revealed that Britons were ratting out their neighbours with such intensity that some police services were forced to put on extra telephony staff to deal with an increase in the volume of calls.