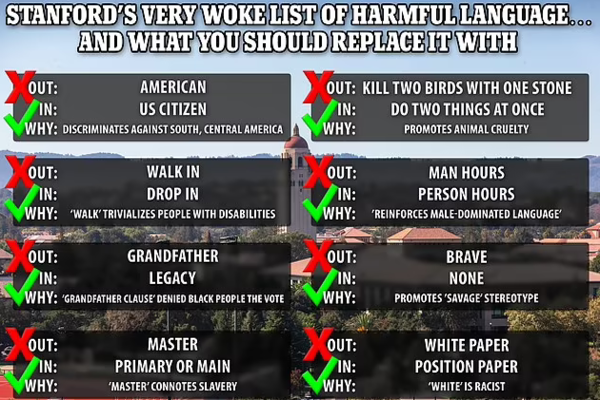 (thegatewaypundit) – The woke losers at Stanford University released a list of ‘harmful language’ to eliminate in an effort to be more sensitive to marginalized groups.

The ‘woke’ guide was released earlier this year but the Wall Street Journal opinion piece made the ‘list’ to go viral.

Stanford University eliminated the word “American” because “This term often refers to people from the United States only, thereby insinuating that the US is the most important country in the Americas (which is actually made up of 42 countries)”

The words “brave” and “grandfather” and “long time, no see” because they are insensitive to indigenous peoples and women.

Reason: ‘Ableist language that trivializes the experiences of people living with disabilities’

Reason: ‘This term has its roots in the “grandfather clause” adopted by Southern states to deny voting rights to Blacks’

Reason: ‘In the Buddhist and Hindu traditions, the word is a sign of respect. Using it casually negates its original value’

Reason: ‘This term perpetuates the stereotype of the “noble courageous savage,” equating the Indigenous male as being less than a man’

Reason: ‘This term often refers to people from the United States only, thereby insinuating that the US is the most important country in the Americas (which is actually made up of 42 countries)’

Reason: ‘Assigns value connotations based on color (white = good), an act which is subconsciously racialized’

Reason: ‘Using person-first language helps to not define people by just one of their characteristics’

Swap: accomplish(ing) two things at once

Reason: ‘The phrase can cause stress about what’s to follow. Additionally, one can never know what may or may not trigger a particular person’