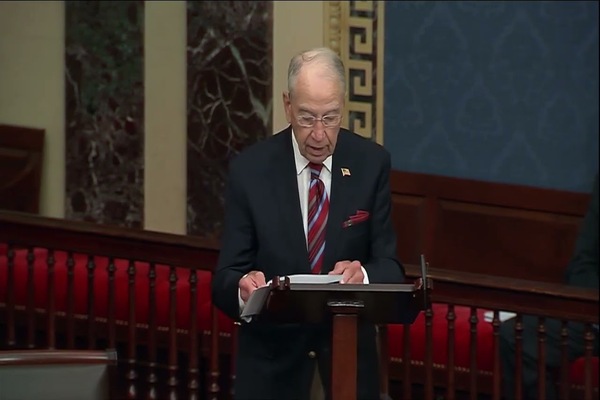 On Thursday, the conservative titan and ranking member of the Senate Judiciary Committee sent Wray a list of questions concerning the unprecedented raid in Palm Beach, Florida, among other topics, including Hunter Biden. The FBI’s execution of a search warrant at Mar-a-Lago was reportedly about documents Trump may have taken with him when he left office last year.

Grassley began by asking Wray about his knowledge of the raid before it happened, what potential role he played in approving it, and the investigation more generally. He then delves into questions concerning the equal application of the law regarding government records, citing the investigation into former Secretary of State Hillary Clinton’s “mishandling of highly classified information.”

Grassley first asks if Wray was “aware of the pending raid of Mar-a-Lago when he sat before” the Judiciary Committee on August 4. Grassley notes in the document that Wray left the hearing early before finishing his second round of questioning, and news reports that followed indicated he traveled to the Adirondacks on his government plane.

Subsequent questions concerning the Mar-a-Lago raid are as follows:

Grassley noted that in October 2016 he penned a letter to then-Attorney General Loretta Lynch regarding the past investigation of Hillary Clinton, asserting she and staffers received “kid-gloves treatment relating to her mishandling of highly classified information.”

He emphasized that 38 people committed “91 valid security violations” and that there were another 497 violations where the committee was unable to establish culpability. Some of the 38 individuals intentionally used Clinton’s unsecured homebrew server to send classified information in correspondence. Another point of contention from Grassley were letters from Attorney Beth Wilkinson, who represented former Clinton Chief of Staff Cheryl Mills and her deputy Heather Samuelson, from June 2016, which “were incorporated by reference into the immunity agreements” for her two clients:

The letters set out the precise manner in which the Department and the FBI would access and use federal records and other information stored on .PST and .OST email archives from Ms. Mills’ and Ms. Samuelson’s laptops. It was my understanding that Ms. Wilkinson and lawyers from the Justice Department drafted the Wilkinson letters jointly before Ms. Wilkinson sent them to DOJ.

My letter expressed concerns about the process by which Congress was allowed to view the Wilkinson letters, that the letters inappropriately restricted the scope of the FBI’s investigation, and that the FBI inexplicably agreed to destroy these individuals’ laptops knowing that the contents were the subject of Congressional subpoenas and preservation letters.

With respect to the 91 security violations committed by the 38 individuals relating to Secretary Clinton’s mishandling of highly classified information, did the State Department refer any of them to the Justice Department or FBI? If so, what steps were taken to investigate them for those security violations and potential criminal conduct? If no steps were taken, please explain why not.

“We simply cleared the site where they’re being held, made sure that it was a secure facility, and capable of holding what could be classified material,” Toner stated, which begs Grassley’s next question.

“Did the FBI engage in the same conduct with respect to former President Trump and Mar-a-Lago? If not, why not?”

Grassley’s final two questions on the Mar-a-Lago raid were as follows:

As the aforementioned fact pattern illustrates, the Justice Department and FBI engaged in long-running negotiation with Secretary Clinton and her lawyers. The government even allowed non-government attorneys to draft the letters that circumscribed the scope of the document review that would be performed by the FBI. That scope of review significantly limited the FBI’s ability to review all relevant records during Secretary Clinton’s tenure with the Obama-Biden administration. Has the Justice Department and FBI provided the same privilege to former President Trump and his attorneys?

“As the aforementioned fact pattern illustrates, the FBI, under the Obama-Biden Administration, agreed to destroy government records pertaining to Secretary Clinton’s mishandling of highly classified information as well as laptops associated with Ms. Mills and Ms. Wilkinson. Those records were subject to congressional subpoena and related requests. Has the Justice Department and FBI provided the same privilege to former President Trump and his attorneys? If not, why not?

Grassley asked Wray to answer his questions by August 25.

He appeared on Fox News Channel’s Fox and Friends on Thursday and noted he spoke to Wray Tuesday. “I didn’t get any satisfactory answers,” he said.

Many conservatives felt similarly about Attorney General Merrick Garland’s televised statement Thursday, where he stated that he “personally approved the decision to seek a search warrant in this matter.” Garland also noted he filed a motion to unseal aspects of the search warrant as well as the itemized receipt of what was seized, both of which Breitbart News has obtained.

The documents show the search warrant was approved on August 5 but was not exercised until Monday, August 8. Garland did not take questions Thursday and emphasized he is unable to provide further information regarding “the basis of the search” due to “federal law, longstanding department rules, and … ethical obligations.”

In a pair of Truth Social posts Friday afternoon, Trump expressed that all of the documents were already declassified:

Number one, it was all declassified. Number two, they didn’t need to “seize” anything. They could have had it anytime they wanted without playing politics and breaking into Mar-a-Lago. It was in secured storage, with an additional lock put on as per their request…

…They could have had it anytime they wanted—and that includes LONG ago. ALL THEY HAD TO DO WAS ASK. The bigger problem is, what are they going to do with the 33 million pages of documents, many of which are classified, that President Obama took to Chicago?

The Truths followed another post Thursday night in which he encouraged the unsealing of the documents.

“It is expected these documents, including the warrant that has been reviewed by Breitbart News, will be made public by the court soon, later on Friday or in the coming days,” Breitbart News noted.