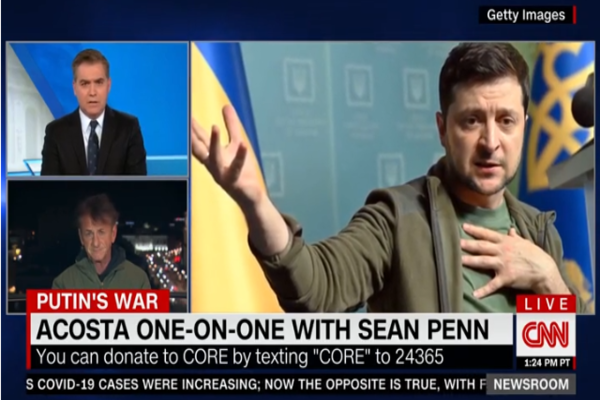 (breitbart) – Actor Sean Penn said Saturday on CNN’s “Newsroom” that the Academy Awards should be boycotted if Ukrainian President Volodymyr Zelensky was not invited to speak virtually.

Acosta said, “The Oscars are tomorrow night. Do you want to see President Zelensky speak at the Oscars via some sort of video link? How do you think the ceremony, how the event should recognize what is happening in Ukraine? What would you say, I guess, if you were there up on stage?”

Penn said, “There is nothing greater than the Academy Awards could do that to give him that opportunity to talk to all of us.”

He continued, “It is my understanding that a decision has been made not to do it. That is not me commenting on whether or not President Zelensky had wanted to. If the Academy has elected not to do it, if presenters have elected not to pursue the leadership in Ukraine who are taking bullets and bombs for us along with the Ukrainian children that they are trying to protect, then I think every single one of those people and every bit of that decision will have been the most obscene moment in all of Hollywood history. And I hope it is not what is happening.”

He added, “If it turns out to be what is happening, I would encourage everyone involved — and I know that even though it may be their moment to celebrate their films, it is so, more importantly, their moment to shine and to protest and to boycott that Academy Awards.”

Penn concluded, “I myself if it comes back to it when I return, I will smelt mine in public. I pray that is not what happened. I pray that there have not been arrogant people who consider themselves representatives of the greater good in my industry that have not decided to check in with leadership in Ukraine. So I’m just going to hope that that’s not what has happened, and I hope that everybody walks out if it is.”