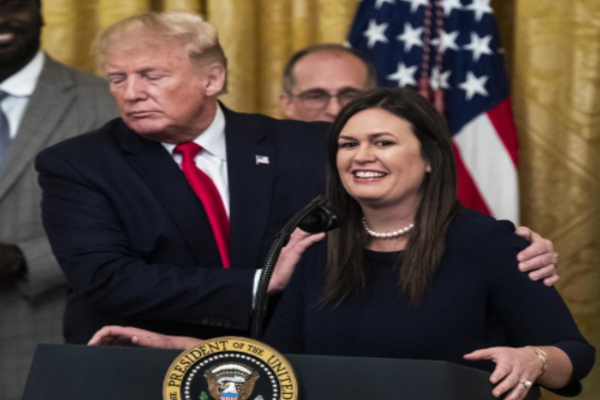 (foxnews) – Sarah Sanders, press secretary under President Trump, has raised nearly $5 million in the few months since she announced a run for Arkansas governor.

The $4.8 million war chest broke quarterly fundraising records from any campaign in the state.

Sanders’ campaign said 34,700 donors had contributed, and a majority of funds came from out-of-state donors. More than $1.5 million came from Arkansans. Ninety percent of the donations amounted to $100 or less.

In a statement, Sanders highlighted the in-state donations. “I am grateful for the generous support of so many Arkansans — in 60 days we held over 50 events in Arkansas and received more than 6,500 donations across all 75 counties of the state. Our message of limiting government and advancing education and opportunity is clearly resonating,” she said.

Sanders, who entered the race on Jan. 25, is running in a GOP primary next year against Leslie Rutledge, Arkansas attorney general. The primary is still more than a year away, and the general election will be held in November 2022.

Sanders, whose father is former Arkansas governor Mike Huckabee, is the early frontrunner in the race. She received an endorsement from her prior boss Trump the day she announced her candidacy.

The state’s current Republican governor, Asa Hutchinson, is leaving office due to term limits. Republican Lt. Gov Tim Griffin dropped out of the governor’s race about two weeks after Sanders joined and is now running for attorney general.

“With the radical left in control of Washington, our governors are our last line of defense,” Sanders added in a statement. “I will be on the front line of the fight for freedom and am encouraged to have so many friends across our state and country standing with us.”