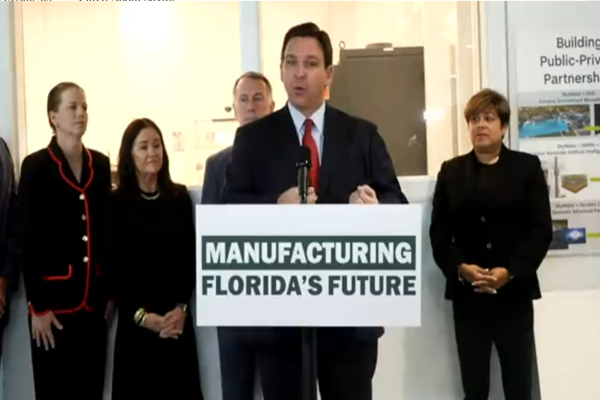 (breitbart) – Gov. Ron DeSantis (R) announced a nearly $10 million investment in semiconductor production for the state of Florida to combat the United States’ reliance on China and other foreign countries for vital supplies, parts, and materials.

DeSantis said the investment will support about 5,400 jobs in Florida, and Osceola County officials have suggested that tens of thousands of jobs will be supported by the investment once the infrastructure for the project is fully completed.

“Manufacturing is something that we need to do a better job of … semiconductors are a huge issue,” DeSantis said:

If you look at how the supply chain works, we are overly dependent on foreign nations, including Tawain which is a good ally of ours, but which is one that is under serious pressure from the Communist Party of China and so we have an opportunity to do more here in the United States and I think the more manufacturing of semiconductors here, the better off we’ll be. [Emphasis added]

DeSantis said the Chinese coronavirus crisis exposed “just how reliant we are on foreign supply chains, particularly supply chains coming out of China ,which is not our friend.” Specifically, on semiconductors, the U.S. has seen a massive shortage that has spurred car prices to skyrocket.

“The more that can be done here, in the United States and Florida, that gives more opportunities for people,” DeSantis said:

We need to start standing up as Floridians and Americans. We cannot be captive, key sectors of our economy should not be captive to some of these foreign nations, in particular, outfits like the Communist Party of China. Even when you have allies like Taiwan, how that could impact if there was a disruption there could throw a lot of this in the loop even more so than what we’ve seen in the last year and a half. So the more we have this capacity within our own country but particularly within our own state here in Florida, the more opportunities there are going to be here for people and the more secure both our economic supply chains will be and our national security. [Emphasis added]

Indeed, through the Chinese coronavirus crisis, the nation’s decades-long free trade policies with China and other foreign countries have left American consumers and industries in a whirlwind of supply chain issues, product shortages, and sky-high prices without any changes to quality.

American manufacturing is vital to the U.S. economy, as every one manufacturing job supports an additional 7.4 American jobs in other industries.