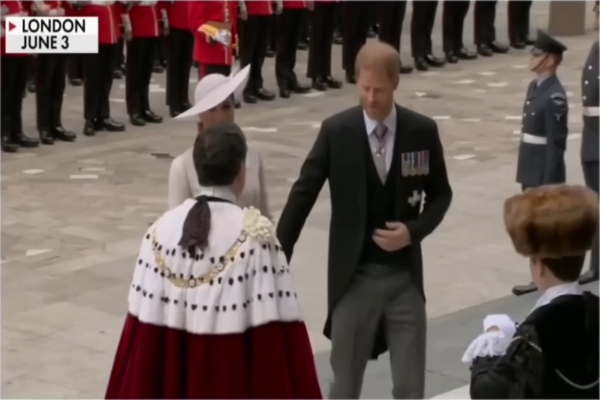 (breitbart) – Prince Harry was backed by his wife Meghan Markle on Monday as they visited United Nations headquarters in New York and he used a keynote speech to excoriate those gathered for the state of the world, “from the horrific war in Ukraine to the rolling back of constitutional rights here in the United States.”

The pair were invited to publicly acknowledge the legacy of the South African anti-apartheid leader Nelson Mandela who spent 27 years in prison and became his country’s first black leader.

The Sussexes travelled to the East Coast from their home in Montecito, California. It’s not known if they were accompanied by their two children.

It was their first public appearance since they flew to the UK for the Queen’s Platinum Jubilee celebrations.

Condemning inaction on climate change, the 37-year-old duke stated before a poorly attended general assembly: “As we sit here today, our world is on fire” before adding the world is in pain and he can feel the sadness all around, because “This has been a painful year in a painful decade.”

“We’re living through a pandemic that continues to ravage communities in every corner of the globe. Climate change [is] wreaking havoc on our planet, with the most vulnerable suffering most of all,” the prince outlined.

Referencing both Vladimir Putin’s bloody invasion of Ukraine and the U.S. Supreme Court’s decision to overturn Roe v Wade, the Duke mourned “the few weaponising lies and disinformation and lies at the expense of the many.

“From the horrific war in Ukraine to the rolling back of constitutional rights here in the United States, we are witnessing a global assault on democracy and freedom – the cause of Mandela’s life.”

The Duke told the U.N.: “As happens so often in history, the consequences of some of the most powerful people in some of the wealthiest countries are being felt even more deeply across the continent of Africa.

“The pandemic, the war and inflation have left Africa marred in a food and fuel crisis, the likes of which we have not seen in decades. Worst still, this comes at a time when the Horn of Africa is enduring one of the longest droughts it’s faced in close to half a century.

“What is happening in Africa is not an isolated event. The drought there is a reflection of extreme weather we are seeing across the globe. As we sit here today, our world is on fire, again.

“These historic weather events are no longer historic. More and more, they are part of our daily lives – and this crisis will only grow worse unless our leaders lead. Unless the countries represented by the seats in this hallowed hall make the decisions – the daring, transformative decisions – that our world needs to save humanity.”

During the two-hour meeting, the 2020 U.N. Nelson Mandela Prize was also awarded to Mrs. Marianna V. Vardinoyannis of Greece and Dr. Morissanda Kouyaté of Guinea.

The prize, which is given every five years, recognises people who have dedicated their lives to the service of humanity.

In 2015, the Duchess spoke about gender equality at a U.N. conference on International Women’s Day.