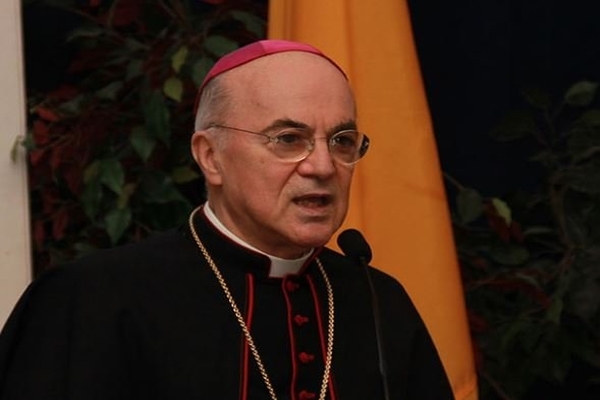 (thegatewaypundit) – Archbishop Vigano is the object of evil attacks by the mainstream media and the globalist left because he stands with Catholics, Christians, and even non-believers who have thirst for justice and truth in this upside-down world we are living in.

The Archbishop shared this special message with us at The Gateway Pundit:

I, you and your twin brother Jim are in my prayers. The fact that you are being attacked by the system is proof that you are on the right path: have perseverance and don’t be intimidated. We are at war, we have to fight.”

Below are some of his comments from a recent interview published yesterday.

When asked about being labeled a ‘public enemy’, Archbishop Vigano responded with the following:

As I have previously noted, it is typical of any totalitarian regime to seek to delegitimize any and every form of dissent, at first by ridiculing the adversary, making him the object of derision so as to discredit him before the eyes of the public opinion. Then, after delegitimizing the person as pathological, or in need of psychiatric care, suggesting that the adversary is mentally unstable who should be hospitalized in a mental institution. Finally, this process ends with the complete criminalization of all dissenters. In this way, the regime creates the necessary premises to separate all its adversaries from civil society.

When asked about spies attending masses of priests who warn their congregations about the perils of the COVID vaccines, the Archbishop replied:

I think that every priest has the right, or rather the duty, to warn his faithful about the real danger – not at all merely hypothetical – represented by the inoculation of this experimental medical product. This is especially the case when the entire psycho-pandemic farce clearly aims to lead toward the establishment of a dictatorship, whose purpose is to control the citizens through a violation of their constitutional and natural rights under the guise of a health emergency.

At another point, the Archbishop warned about the preparation that took place before the pandemic.

This operation required meticulous preparation and needed the participation of large parts of the public institutions and the private sectors, including the complicity of the Judiciary, of law enforcement and the media. These combined efforts are a real coup d’état and the pandemic is just a pretext – the profasis – through which is introduced the seeming inevitability of the violation of fundamental rights and the consequent establishment of the totalitarian regime of the New Order. In this New Order the pandemic superstition reigns supreme, with its magicians, its vaccine temples, its irrational rituals and its excommunications of sinners vitandi (“to be avoided” or “to be shunned”) — those who do not agree to give up their reason even before apostatizing from their Faith in order to embrace this insane ideological madness.

In response to the New World Order (NWO):

The New World Order is neither New nor Order: it represents the foolish ambition of Satan to overthrow the providential plan of God, to cancel the true Religion that leads to eternal salvation and finally to replace the “ordo christianus” (“the Christian order”) with infernal chaos. In this disorder, the lie replaces the Truth, injustice and abuse of power replace justice, whim instead of obedience to the law of God, death instead of life, illness instead of health, the legitimization of Evil and the condemnation of Good, the persecution of good people and the praising of evil ones, ignorance in the place of culture and wisdom, ugliness and horror instead of beauty, division and hatred instead of harmony and love. Satan doesn’t want to be worshipped by adopting the qualities of God, but by demanding to be an object of adoration through everything that is evil, obscene, false, absurd, and monstrous. He seeks complete subversion, a subversion ontologically devilish and Antichristic: a “New Order” obtained by means of a global coup d’état imposed under the guise of an engineered planned emergency.

The vaccine campaign, lacking any scientific validity, serves first of all as the apparent legitimization for implementing global tracking and controls, today under the pretext of limiting COVID spread (a pretext which is false, because, among other reasons, the vaccinated can still become infected and be contagious). But tomorrow, this campaign aims to expand its reach, extending the “Green Pass” to include information used in a “social credit system” to confront a “green emergency,” which will be likewise false and specious. The “Green Pass” is being conceived as something like the Mark of the Beast mentioned in the Apocalypse of Saint John to allow or forbid people to buy, sell, travel, spend, eat and live.

Secondly, the inoculation of people with an experimental genic serum that provokes a weakening of our natural immune system represents a very grave crime, because it turns ordinary healthy people into chronically ill people, and consequently into customers of the health care companies and private care. This situation hugely inflates the profits of the globalist élite and brings a general impoverishment of the population.

Read the entire interview at theeyeoftheneedle.com from Wayback Machine. The original website was suspended.