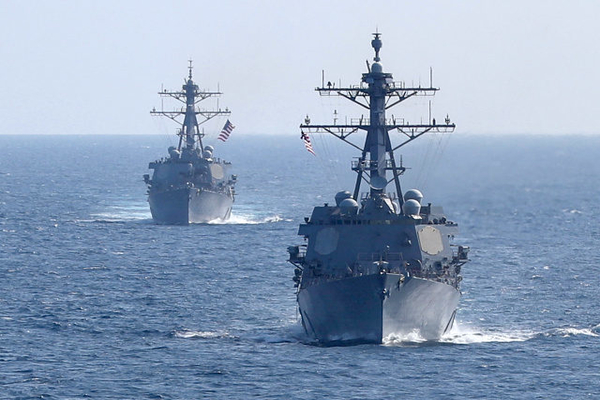 (breitbart) – Vice Admiral Sam Paparo, who commands the U.S. Navy’s 5th Fleet, said Sunday the U.S. has achieved “uneasy deterrence” with Iran, a sign that if President Donald Trump leaves office, he will hand a vastly improved situation to his successor.

In January 2016, the last year that President Barack Obama and Vice President Joe Biden were in office, Iran seized two U.S. Navy boats and took the sailors aboard prisoner, forcing them to kneel and releasing humiliating photographs to the world.

The incident happened just months after the United Nations Security Council approved the Iran nuclear deal. (The Obama administration took the Iran deal to the UN and never submitted it to the Senate for approval, as the Constitution requires.)

In May 2018, President Trump withdrew from the Iran deal. In June 2019, he called off an airstrike against Iran that would have retaliated for the downing of a U.S. Navy drone. But in January 2020, Trump ordered a strike in Iraq on General Qasem Soulemani, the leader of the Iranian Revolutionary Guard Corps, classified as a terror group by the Trump administration. Iran’s largely ineffective response — missiles fired at U.S. troops in Iraq — confirmed America’s new regional deterrence.

“We have achieved an uneasy deterrence. That uneasy deterrence is exacerbated by world events and by events along the way,” Vice Admiral Paparo said, according to a report by the Times of Israel. “But I have found Iranian activity at sea to be cautious and circumspect and respectful, to not risk unnecessary miscalculation or escalation at sea.”

In plans for his incoming administration, Biden has said he intends to return to the Iran deal. He has said he would drop existing U.S. sanctions to entice Iran to negotiate, as the Obama administration did, without broader agreement on Iran’s destructive regional policies.