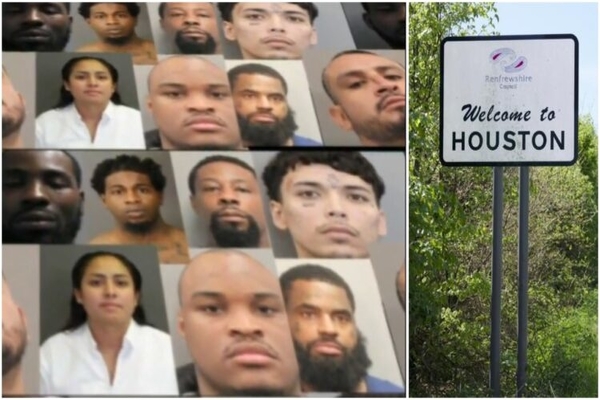 (bigleaguepolitics) – In Harris County, Tex., where the city of Houston is located, at least 113 defendants charged with capital murder have been freed and let loose on the streets thanks to criminal justice reform.

Fox 26 Houston reported the shocking news, which they claim is part of “more than 50,000 accused felons [benefiting] from the “catch and release” philosophy of “criminal justice” perpetrated by the current crop of democratic “reform” judges.”

Crime Stoppers Houston has shown that 155 innocent people have died as the result of encounters with these accused criminals who had been freed while on bond. Behold the future of America under the permanent liberal majority enabled by demographic changes.

Big League Politics reported earlier this year on how a suspected cop killer was out of custody just days after the law enforcement official was gunned down on the Houston streets:

“A Houston career criminal charged with the shooting death of a veteran police officer was bailed out of the Harris County Jail last week, troubling members of the community who are unhappy to see Robert Soliz leave police custody.

24-year old Soliz was charged with the shooting of Sean Rios in November, being arrested less than 24 hours after the killing of the off-duty 25-year veteran officer. Soliz has been arrested several times since 2014 for charges ranging from drug possession to evading arrest and criminal trespass. Police have described the youth as an admitted gang member.

Houston Police Chief Art Acevedo has described Rios being shot in the crossfire of an altercation between two vehicles.

Soliz somehow came up with the massive bond of $750,000 a judge had set for him sometime last week, leaving many questioning as to how the 24-year old man paid three-quarters of a million dollars to leave jail. A $500,000 bond was set on the murder charge, two $100,000 bonds on two aggravated assault counts, and a $50,000 bond for drug possessions. As a condition of his bond, he’s under 24/7 house arrest and outfitted with a GPS ankle monitor.

Houston Police Union representative Douglas Griffith slammed the court system for setting the murder defendant loose, even after Soliz had claimed to be indigent in earlier court filings.

It’s highly unusual for bail to even be set in murder cases at all, let alone for a defendant with a criminal history who is accused of murdering a police officer. Soliz was already out of jail on a $100 firearm possession bond when he was arrested for the shooting of Rios.”

Every city will be governed in this manner when diversity and multiculturalism reign supreme over what was formerly the American Republic. This is what “progress” and “equity” means in the eyes of a deranged and psychotic leftist movement at war with civilization.