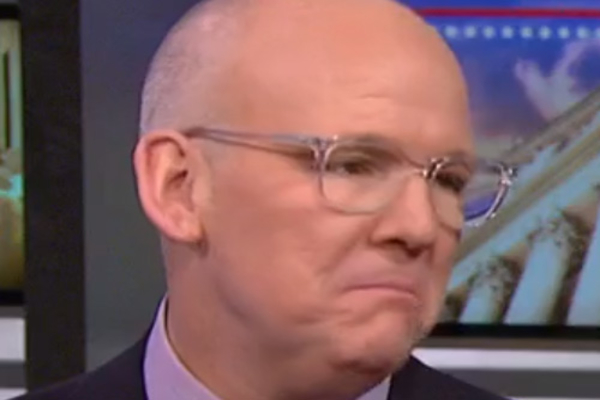 Anchor Chuck Todd said, “I want to read what Bart Gellman wrote in the cover story for The Atlantic. Some might say it is hyperbolic, but John Heilemann, I’m curious if you think it is? The headline is Trump’s Next Coup Has Already Begun. ‘Trump and his party convinced a dauntingly large number of Americans, that the essential workings of democracy are corrupt, that the made-up claims of fraud are true, that only cheating can thwart their victory at their polls, that tyranny usurped their government and that violence is a legitimate response.’ Hyperbolic or fact?”

Heilemann said, “Fact, I think. The strength of that Gellman piece is it lays out this extraordinary reality that there is this research that shows something like 8% and maybe as many as 12% that say Joe Biden was illegitimate and violence is an appropriate tool to removing him and restoring Donald Trump. That’s between 20 and 30 million people. That’s a mass movement in America in favor of political violence, which is a new thing. We’ve been political violence before, lynching many things over the course of time that African-Americans have suffered, but this is 30 million people right now who are ready to take up arms.”

He added, “You put that together with what the president, the former president, and his allies are doing in the political realm, statehouses, state legislatures and the party apparatus to be able to engineer a situation where they are in a stronger position to pull off a coup in 2024 than they were 2020. That’s not hyperbolic at all. Those are all facts.”