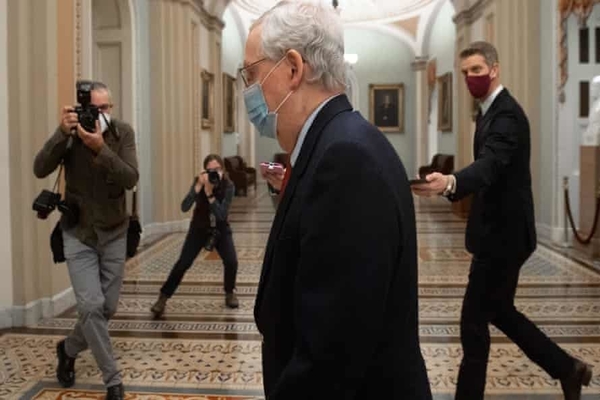 After Biden announced Justice Stephen Breyer would leave the Court and a replacement would be nominated before the end of February, McConnell released a statement warning Biden to not “outsource” the nomination to the radical left.

“Looking ahead—the American people elected a Senate that is evenly split at 50-50,” McConnell said. “To the degree that President Biden received a mandate, it was to govern from the middle, steward our institutions, and unite America.”

“The President must not outsource this important decision to the radical left. The American people deserve a nominee with demonstrated reverence for the written text of our laws and our Constitution,” he added.

Biden confirmed Thursday he intends to nominate someone who is both black and female.

“While I have been studying backgrounds and writings, I have made no decision except one,” Biden said. “That person will be the first black woman ever nominated to the United States Supreme Court.”

Biden’s intention to nominate a black individual who is also a woman comes as Sen. Joe Manchin (D-WV) and Sen. Kyrsten Sinema (D-AZ) have said they will not simply rubber-stamp whoever Biden nominates.

Sinema said she will base her decision on “whether a nominee is professionally qualified, believes in the role of an independent judiciary, and can be trusted to faithfully interpret and uphold the rule of law.”

While Sinema comes from a purple state, Manchin’s West Virginia voted in 2020 for Donald Trump by nearly 40 points.

Both Senators have a history of opposing some of Biden’s radical policies in 2021, though they’ve been reliable “yes” votes on Biden’s judicial nominees.