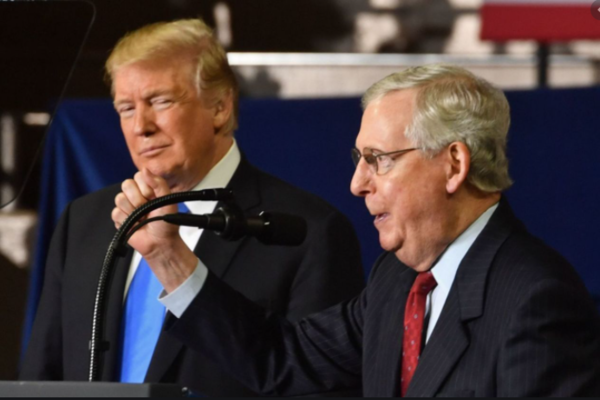 In McConnell’s statement, he called the left’s attempt to pack the court a “direct assault on our nation’s independent judiciary,” another sign of the Biden administration veering further left.

The Republican Senator said there is nothing to “study” about the judicial branch’s structure or operation, adding that any “rational observers know well there is nothing.”

Constitutional scholars and the justices themselves have repeatedly affirmed the position of the late Justice Ruth Bader Ginsburg: ‘nine seems to be a good number.’ Justice Breyer said just this week that ‘structural alteration’ like court packing would mean ‘eroding’ the public’s trust in the judiciary. And by overwhelming margins, the American people agree.

Currently, a growing number of elected Democrats have an “open disdain for judicial independence a key part of their political platforms.” The Democrats have even gone as far, where “a sitting Senator has personally threatened certain justices should they rule against liberal interests,” he said, referring to Senate Majority Leader (then-Minority Leader) Chuck Schumer (D-NY) threatening Justices Neil Gorsuch and Brett Kavanaugh outside the Supreme Court in March 2020.

In addition to Schumer, more “Democrats signed a threatening brief suggesting the Court needed to either deliver liberal rulings or face being ‘restructured.’” Biden spent a good portion of time on this campaign trail, “playing coy on the issue,” McConnell recalled.

McConnell said Friday that Biden finally admitted what his true intentions are now that he has the safety of a four-year term. The Republican calls Biden’s view on the court “out of whack.”

“So anyone who was surprised by the creation of a commission on packing the Supreme Court simply hasn’t been paying attention,” later adding, the “faux-academic study of a nonexistent problem fits squarely within liberals’ years-long campaign to politicize the Court, intimidate its members, and subvert its independence.”

“This is not some new, serious, or sober pivot away from Democrats’ political attacks on the Court. It’s just an attempt to clothe those ongoing attacks in fake legitimacy,”‘ McConnell added, saying this would be disappointing to anyone, whether they are Democrat or Republican, to help this commission in any way.

“This is just another example of the liberal preference for attacking norms and institutions, rather than working within them. When Democrats lose a floor vote, it’s time to change Senate rules,” the Republican said, adding when the Democrats lose a presidential election, they would call for the abolishing of the electoral college.

“Activists’ cases fall flat against the rule of law, it’s time to ignore Justices Ginsburg and Breyer and pack the Supreme Court,” he wrote.

McConnell calls in to question the promises Biden made during his campaign to “lowering the temperature and uniting a divided nation.” Biden would “stop giving oxygen to a dangerous, antiquated idea and stand up to the partisans hawking it,” if that’s what Biden really wanted to do, McConnell concluded.