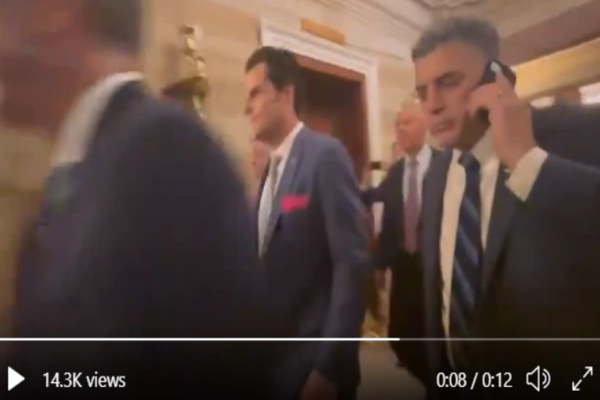 (bigleaguepolitics) – A recent tweet by the Communications Director for Representative Matt Gaetz (R-FL) shows a video of Gaetz and various other members of Congress walking through a Capitol building without masks on in defiance of Speaker Nancy Pelosi’s forced mask rule.

Another video found on Instagram shows Gaetz surrounded by an even larger crowd of maskless people.

The move by Gaetz and other Congressional members seen in the video comes as the Biden administration and CDC have once again called for forced masking on adults and schoolchildren alike, with many Americans outraged at the idea of continued draconian measures. Other well-known and freely-breathing members of Congress can be seen walking along with Gaetz, including North Carolina Representative Madison Cawthorn and Marjorie Taylor Greene (R-GA).

Big League Politics has previously reported on tensions regarding draconian orders in the White House, with Congressional Rep. Thomas Massie (R-KY) asserting the rules are arbitrary and not based on science.