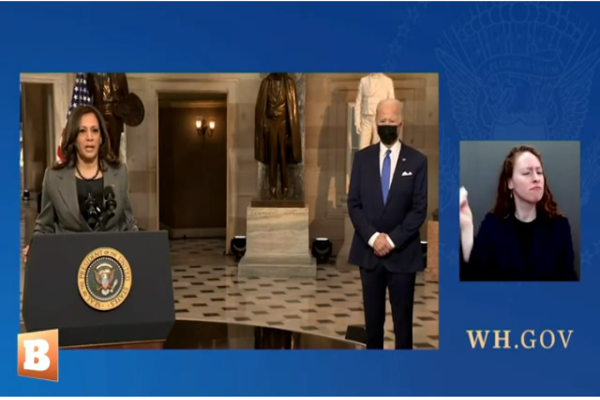 (breitbart) – Vice President Kamala Harris kicked off the Biden administration’s remarks on the first anniversary of the January 6, 2021 Capitol riot by comparing it to the bombing of Pearl Harbor in 1941, and the terrorist attacks of September 11, 2001.

“Certain dates echo throughout history, including dates that instantly remind all who have lived through them where they were and what they were doing when our democracy came under assault. Dates that occupy not only a place in our calendars, but a place in our collective memory. December 7th, 1941. September 11, 2001. And January 6th, 2021.”

The rubble of the World Trade Center smoulders following a terrorist attack 11 September 2001 in New York.

Harris, who participated in a Black Lives Matter protest outside the White House in May 2020 just hours after rioters attacked police around the building, injuring dozens, assaulting journalists, and forcing the evacuation of the president into a bunker, declared of the Capitol rioters: “What they sought to degrade and destroy was not only a building, hallowed as it is. What they were assaulting were the institutions, the values, the ideals that generations of Americans have marched, picketed, and shed blood to establish and defend.”

The Vice President, who spread claims of Russian collusion with Trump, warned Americans about “peddling lies and information by some radical faction that may be resurgent, but whose roots run old and deep,” hinting at Donald Trump, and suggesting a connection between Trump supporters and extremism.