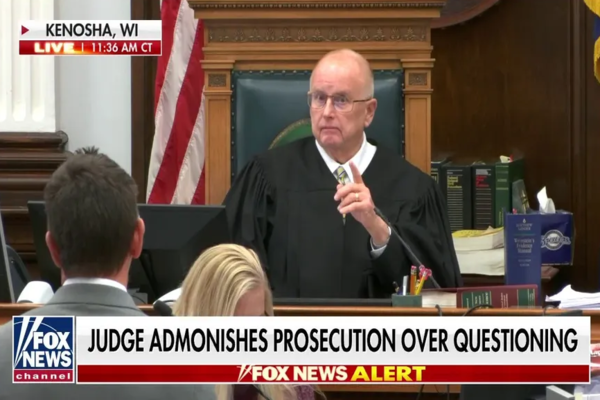 (breitbart) – Judge Bruce Schroeder expressed skepticism over the weapons charge in the Kyle Rittenhouse murder case in Kenosha, Wisconsin, on Friday, allowing a jury instruction submitted by the defense in which an exception to the law is highlighted.

Rittenhouse faces a charge of possession of a dangerous weapon by a person under 18, because he was 17 at the time of the shootings on Aug. 25, 2020, during a Black Lives Matter riot. (He has argued self-defense regarding the murder charges.)

But the defense pointed out that there are exceptions to the state law on the matter, including an exception for people who have a certificate of accomplishment for hunting, or for possessing firearms other than a short-barreled shotgun or rife.

The defense argued that Rittenhouse did not posesss a short-barreled shotgun or rifle. The prosecution complained that the defense had not measured the rifle, but Schroeder pointed out that the prosecution, not the defense, has the burden of proof, and the defense chimed in that there was, in fact, evidence presented during the trial about the length of Rittenhouse’s rifle.

Earlier in the trial, the judge dismissed efforts by the defense to have the weapons charge dropped. But as the lawyers argued over the jury instructions on Friday, he said he had spent “hours” trying to understand the statute, which he said was unclear.

While he had to construe the statute as valid, he lamented that the law was difficult for ordinary people to understand.

When the prosecution argued that the people with whom Rittenhouse had left the rifle in Wisconsin believed that it was not legal for him to possess it until he was 18, Judge Schroeder said that he was “not allowed” to base his ruling on their views.

Ultimately, the judge said he would let the charge go to the jury, but would allow the defense to include an instruction that pointed out the exceptions in the law — a hurdle that would make it more difficult for the prosecution to prove guilt.

Joel B. Pollak is Senior Editor-at-Large at Breitbart News and the host of Breitbart News Sunday on Sirius XM Patriot on Sunday evenings from 7 p.m. to 10 p.m. ET (4 p.m. to 7 p.m. PT). He is the author of the recent e-book, Neither Free nor Fair: The 2020 U.S. Presidential Election. His recent book, RED NOVEMBER, tells the story of the 2020 Democratic presidential primary from a conservative perspective. He is a winner of the 2018 Robert Novak Journalism Alumni Fellowship. Follow him on Twitter at