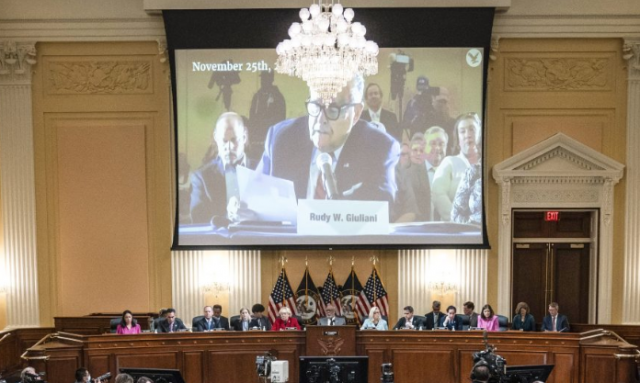 By failing to ask Cipollone to confirm or deny the sensational statements attributed to him — such as that Trump officials could be “charged with every crime imaginable” by going to the Capitol during the riot — they avoided contradicting her.

Hutchinson’s testimony, which was entirely based on hearsay, was treated as a major breakthrough for the committee because she appeared to implicate former President Donald Trump and key aides — until her factual claims began to fall apart.

The Times also notes — as if it were normal practice — that committee aides are following a script and that they are selectively editing bits of Cipollone’s testimony to air them at future hearings and drive their particular narrative:

The panel recorded Mr. Cipollone on video with potential plans to use clips of his testimony at upcoming hearings. Aides have begun strategizing about whether and where to adjust scripts to include key clips, one person said. The next hearing is scheduled for Tuesday.

Cipollone had already cooperated with the committee before, while declining to testify under oath or to appear on video, citing concerns of executive privilege and attorney-client privilege. The committee then issued a subpoena for him to return.

The motivation for the subpoena was Hutchinson’s testimony, which appeared to invite elaboration from Cippolone. However, the committee reportedly did not ask him about that, adding fuel to criticism that the hearings are a “show trial.”