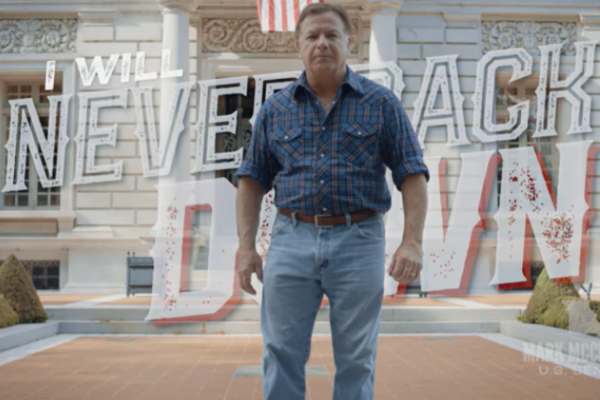 (bigleaguepolitics) – Patriot Mark McCloskey, who stood with his wife to defend his property after being confronted by a mob of Black Lives Matter thugs last summer, is running for U.S. Senate in Missouri and has released his first campaign video.

“When the angry mob came to destroy my house and kill my family, I took a stand against them. Now I’m asking for the privilege to take that stand for both of us. I will never back down,” he said.

McCloskey’s rallying cry is “Never Back Down,” and he vows to fight the entirety of the Washington D.C. swamp if he is elected to the U.S. Senate next year.

“Our nation is under attack. Big Tech, big business, the swamp in D.C., are all working together to destroy our God-given freedom, our culture and our heritage. When was the last time a politician defended you, defended America, stood between you and the mob? We need defenders but all we get is dividers,” he said.

“Every day they teach us to hate each other – left vs. right, black vs. white, rich vs. poor – this is a tactic to destroy us. But we are all Americans. We are Missourians. Our nation, our state, our homes are worth defending. Our freedoms are worth defending,” McCloskey continued.

“I can promise you one thing, that when the mob comes to destroy our homes, our state and our country, I will defend them. I will never back down,” he added.

His campaign launch video goes on to describe his history as a Republican who used to be more passive. The BLM mob woke him up and now he is incredibly gung ho about fighting back against the far left to save America.

“Mark my words: The mob is coming for all of us. Cancel culture, the poison of critical race theory, the lie of systemic racism backed up by the threat of mob violence, attacks on our 2nd Amendment, erosion of electoral integrity are all intentionally designed to destroy all we hold near and dear,” McCloskey said.

“Missouri needs bold politicians who can stand up to the fury of the leftists and marxists. Somebody who won’t run or hide and quit when the going gets tough. I promise you I will never stop fighting for you,” he added.

McCloskey noted that he served as a spokesman for the Trump campaign throughout 2020, inspiring people throughout the country to support the president.

“Missouri represents the best of America. We are hard-working, good spirited, God-fearing people with a drive to succeed. We are farmers, small business owners, moms and dads, patriots, and we will fight together for our God-given freedom,” he said to conclude the video.