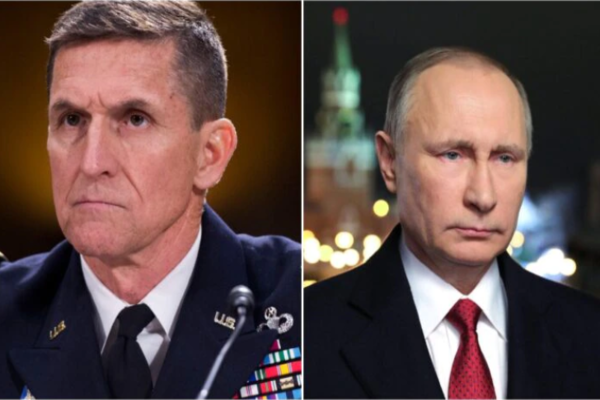 (bigleaguepolitics) – General Michael Flynn, the former U.S. National Security Adviser under President Donald Trump, released an op/ed calling for the Biden regime not to get involved in Ukraine.

Flynn believes that hundreds of millions could die due to U.S. involvement and the Biden regime has no authority to dictate the national interest of Russia, which he refers to as a “great nation.”

“​The rhetoric about the Ukraine conflict is out of control. President Joe Biden threatens that Russia would “pay a heavy price” for any incursion into Ukraine. Secretary of State Antony Blinken warns of “massive consequences” for Russia. Sen. Roger Wicker of Mississippi told Fox News’ Neil Cavuto, “We don’t rule out first-use nuclear action.” First-use nuclear action rhetoric is not only extremely dangerous, but these types of nonsensical remarks also threaten the stability of the entire world,” Flynn wrote in his Western Journal op/ed.

Flynn argues that the propaganda meant to sell Americans on the necessity of military intervention in Ukraine is another deep state scam.

“​The Biden administration wants us to believe that Russia is seeking to regain its former greatness by overthrowing the government of Volodymyr Zelensky and replacing it with a puppet government that it would control. The neocon-dominated establishment in both of our political parties wants us to believe that the Soviet Union still exists and is inherently expansionary,” Flynn wrote.

“Just as the nation was sold a hoax about Russia having elected President Donald Trump in 2016, another illusion now is being sold. Do not believe a word of it!” he added.

Flynn believes that Putin’s worries about Ukraine’s admission into NATO are valid, as that would allow the NATO and the U.S. to place missiles at the Russian border.

“​While Russia’s concern is obvious, the Biden administration has never even tried to explain the existence of any vital national interest of the United States in Ukraine that could justify hostilities. For his part, Blinken has asserted the principle that Ukraine must have the right to join NATO and claimed that principle could never be compromised. The Russians understand that would likely result in nuclear weapons being placed at its doorstep — closer to Russia than Cuba is to the United States,” Flynn wrote.

Flynn is not a pacifist by any stretch of the imagination, he explains, but he believes it is incredibly short-sighted to provoke Russia in a conflict that serves no strategic value for the U.S. to be involved in.

“I am not pollyannish that war will forever cease; I am by nature a warrior. I do believe, however, from time to time, to be a nation at peace, we must return to our faith and our forefathers to remind ourselves what the real consequences of wars cause,” he wrote.

“War is not fair — it is not meant to be — and a looming war with Russia would be anything but fair. Take that to the bank, if you can find one after a nuclear exchange,” Flynn added.

Despite the immense amount of persecution he has endured, Flynn continues to fight for his country. This man is the textbook definition of a patriot, and servants of the military-industrial complex have much to learn from Flynn’s concern for the rank-and-file.