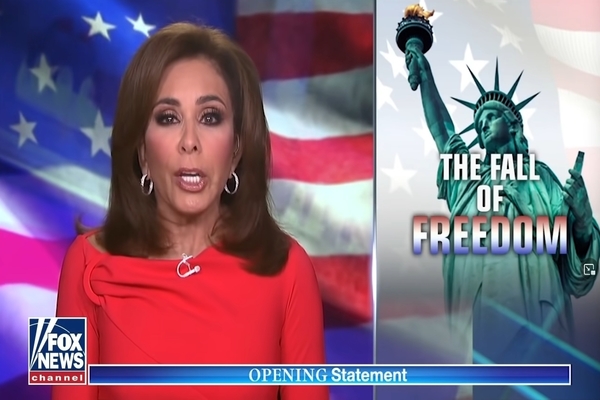 (breitbart) – On Saturday’s broadcast of FNC’s “Justice,” host Jeanine Pirro warned an announcement from Attorney General Merrick Garland was part of a broader plan to “separate children” from parents.

According to Pirro, the Department of Justice had no role in interfering with local authorities tasked with maintaining public safety at the local level, particularly local school board meetings.

Pirro warned the ultimate goal was to fulfill a “Marxist agenda.”

PIRRO: Every day in this country, the government under Joe Biden or whoever is running the joint, infringes more and more upon our freedoms, pushing Americans closer and closer to the edge. The latest, the Attorney General of the United States instructing the Department of Justice and the FBI to address threats against school boards and teachers over COVID-19 restrictions, masks, and critical race theory saying those threats should be discouraged and prosecuted.

The memo reads that, quote, “Constitutional protections don’t extend to efforts to intimidate individuals based on their views.” Wait. What?

A primer: The Constitution protects actions and speech where individuals seek a redress of their grievances. Now, however, the AG seeks to remove that constitutional right if you’re a parent concerned about how your children are being taught. The DOJ actually threatening parents concerned about their children?

But it’s OK to follow a U.S. Senator into a bathroom and threaten to take her out of office. It’s OK for Black Lives Matter rioters to intimidate and literally burn down our neighborhoods and businesses.

But Mama, don’t even think about objecting to the ideological racial hatred being hoisted upon your own children.

This is viewpoint discrimination, which is particularly disfavored by the courts because it restricts speech on a given subject matter. With limited exceptions, the government cannot pick and choose what speech is acceptable and what will be suppressed or viewed as threatening. They do not have that right.

The singling out of a particular opinion for treatment different than other viewpoints is viewpoint discrimination. The Constitution and the United States Supreme Court agree that even hate speech is protected, although I’m not suggesting that that’s what’s happening here.

The left, however, is all in.

CHRIS HAYES, MSNBC HOST: How one Republican senator is pretending school board harassment and intimidation aren’t off the charts?

UNIDENTIFIED MALE: Some behavior is so bad, it is being compared to domestic terrorism.

PIRRO: And by the way, how exactly is the FBI being advised to address these so-called intimidation efforts? Nowhere does this crony of the Attorney General Merrick Garland, who you may recall Barack Obama wanted to put on the Supreme Court described as a moderate define intimidation.

SEN. JOSH HAWLEY (R-MO): … parents waiting sometimes for hours to speak at a local school board meeting to express concerns about critical race theory or the masking of their students, particularly young children, is that in and of itself — is that — is that harassment and intimidation?

LISA MONACO, DEPUTY ATTORNEY GENERAL: Spirited debate is welcome, it is a hallmark of this country.

HAWLEY: All due respect, it didn’t make it quite clear. It doesn’t define those terms, nor does it define harassment or intimidation.

PIRRO: Is it reasonable for a school teacher to feel intimidated if a parent goes to a school board meeting and says the teacher should not be teaching CRT? Is that enough for the FBI to make a visit to your home?

I’m not hearing this Attorney General saying any threats will not be tolerated or we’ll send the FBI to school board homes or teacher’s homes. No. Because he is nothing more than a political hack following on the Biden Marxist agenda, which is reportedly a moneymaker for his daughter and son-in-law whose own company is funded by Facebook founder, Mark Zuckerberg, which company allegedly employs critical race theory in its work.

And Merrick Garland, before you sic your agents against parents, have you seen what your teachers and school board members are saying about parents?

UNIDENTIFIED FEMALE: If your parent wants to come talk to me about how I’m not doing a good enough job in distance learning, just dare them to come out.

UNIDENTIFIED FEMALE: Are we alone?

UNIDENTIFIED FEMALE: [Bleep] you’re going to call me out, I’m going to [bleep] you up.

PIRRO: Want to reassess who the victims really are here? No. You’ve already decided who to demonize.

Now in the coming days, the DOJ will announce a series of measures to address the rise in criminal conduct towards school personnel.

Wait, you mean, the National School Boards Association sends a letter to you, to tee up the need to categorize parents as domestic terrorists, and that’s it? The FBI is now in the middle of parents and local school board meetings?

How about millions of American parents, many of whom were unable to work because the American Federation of Teachers decided they weren’t going to teach our children? How about millions of American parents write a letter to you, Merrick Garland, telling you they feel threatened whenever they appear before a school board unwilling to allow them to exercise their freedom of speech.

And why the FBI? They don’t even have jurisdiction of issues on a local level and calling a parent a domestic terrorist doesn’t change a darn thing. They have no jurisdiction. Since when does the FBI, that esteemed agency where every agent is special — there are no agents, only special agents. Since when do they handle threats on a local level? These aren’t national security issues.

The local police, the Sheriff, the DA do this every day.

Doesn’t the FBI have better things to do like follow up leads that could have but didn’t, like in the Boston Marathon bombing case, the Parkland School shooting case, the Jeffrey Epstein case, the Larry Nasser girls Olympic case — all of them highlighting the ineptitude of the FBI.

Or maybe, they were just too busy on political prosecutions.

There is simply no one better than the local police with their ears to the ground. They know all the characters, they know all the proclivities to handle these cases. But I guess, I forgot.

This action by an Attorney General, no less is Federal overreach designed to silence parents, accept an ideology, foreign and unacceptable to them, and call them and categorize them as domestic terrorists. But worse, it’s designed to terrorize parents and stop them from voicing their concerns.

Folks, it’s all part of the Marxist agenda: Separate children from their parents. Family is not the most important unit, the government is.

They’ve already imposed political correctness on our free speech, infringing on that speech with the consequence of being cancelled, if it is not acceptable speech to them. And the next step is finding or outlawing our speech just as they do in Europe.

If it’s not true, don’t allow people to put it up there. Have them face consequences.

This is all very serious, folks. It’s one thing to set standards, it is altogether something else to threaten parents when they are simply looking to protect their children.

Our children deserve better. It is time to take your kids out of public schools. No matter what clueless Joe says about caring, anyone who has got kids in public schools has already lost a year to two years of teachers being paid to sit at home while you do their work.

Your kids have already lost to those in charter schools and private schools and religious schools. They’ve lost to other countries that kept teaching. They are doing you no favors. And on top of that, they want to terrorize you and shut you up.

It’s time your school taxes follow your child. It’s not smart to poke Mama Bear when she is protecting her cubs. You never know what’s going to happen.