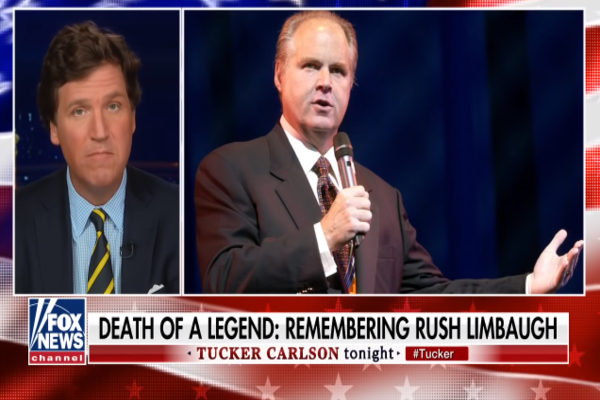 (breitbart) – Wednesday, Fox News Channel’s Tucker Carlson opened his program by paying tribute to conservative talker Rush Limbaugh, who passed away earlier in the day due to lung cancer.

CARLSON: Rush Limbaugh passed away today as you’ve doubtless heard. He had just turned 70 last month. There are people, literally millions of people who listen to Rush Limbaugh faithfully every day for 30 years. Some of them cried when they heard the news.

Others on the internet gloated, revealing the depth of their cruelty and soullessness. We’re going to ignore them tonight. They have too much influence over our culture already.

Instead, we’re going to tell you about Rush Limbaugh, what he did and why he mattered. Limbaugh was a profoundly talented broadcaster, but that’s not why he endured for generations and singlehandedly reshaped the media business, which he did.

Rush Limbaugh actually believed things and he believed them with sincerity, that was his secret. What he believed most of all was that America is a good and decent place and worth preserving. Here he is in 2009, explaining what he believes about America.

RUSH LIMBAUGH, RADIO TALK SHOW HOST: As human beings, we’re no different than the human beings anywhere else in the world and there have been families, clubs, countries, thousands of years on this planet longer than we have. We’re barely 250 years old and we have outdone everybody in almost everything that lives, it raises the standard of living in the history of the world.

It’s not because our DNA is different, it is not because we’re special human beings, it is because of our freedom. It’s because of the founding documents and those rights that we have, where they come from.

CARLSON: The founding documents. He had actually read them, he really believed them. He wasn’t just saying it, and that was obvious when he spoke.

That was a threat to the people who want it to be more powerful than the Constitution allows, so they tried to silence him. We think of corporate censorship as a new phenomenon, but Rush Limbaugh was fighting it 30 years ago and winning.

LIMBAUGH: I think I just happen to be saying what a whole lot of people think that don’t have the chance to say themselves. That’s why they call me the most dangerous man in America. Somebody is finally saying this stuff.