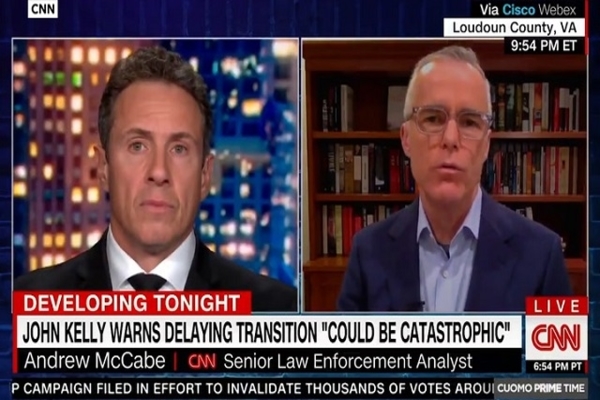 McCabe, who personally signed off on investigating Trump for obstruction of justice, is panicking along with the rest of the FBI and CIA over Trump’s latest push to declassify everything from the Russia witch hunt.

Former acting FBI director Andrew McCabe has warned that classified intelligence from bureau’s investigation into President Donald Trump’s 2016 campaign ties to Russia could contain information that would “risk casting the president in a very negative light”.

[…] “There is some very, very serious, very specific, undeniable intelligence that has not come out, that if it were released, would risk compromising our access to that sort of information in the future.

“I think it would also risk casting the president in a very negative light – so, would he have a motivation to release those things? It’s almost incomprehensible to me that he would want that information out, I don’t see how he spins it into his advantage, because quite frankly, I don’t believe it’s flattering.

Asked if Mr McCabe thought there was more “bad stuff” about Mr Trump that wasn’t already publicly known, he replied: “There is always more intelligence, there is a lot more in the intelligence community assessment than what is ever released for public consumption.

“The original version of that report was classified at the absolute highest level I have ever seen. We’re talking about top secret, compartmentalised code word stuff, and it would be tragic to American intelligence collection for those sources to be put at risk.”

Senator Chuck Schumer similarly threatened Trump with intelligence agency retaliation back in 2017, telling him that if you “take on the intelligence community, they have six ways from Sunday at getting back at you.”

Frankly, it sounds to me like McCabe is just bluffing.

I seriously doubt there’s anything damaging they have on him which they haven’t illegally leaked already. Most people understand by now our intelligence agencies are just a deep state criminal mafia and wouldn’t believe anything they selectively-leaked anyways.

As Don Jr said earlier this month, it’s time to “DECLASSIFY EVERYTHING!!!”

Don’t just declassify what happened with the Russia witch hunt.

There’s a plethora of secret intelligence which would cast our criminal deep state in a “very negative light.”

Follow through on your campaign promise to let us know who “really knocked down the World Trade Center” and release all the files on who was actually seen celebrating on 911.

Release the JFK files you promised us in 2017 only to turn around and block them a few months later.

Release everything they’ve hidden from us about the attack on the USS Liberty.

As Don Jr. said, “We can’t let the bad actors get away with it!”