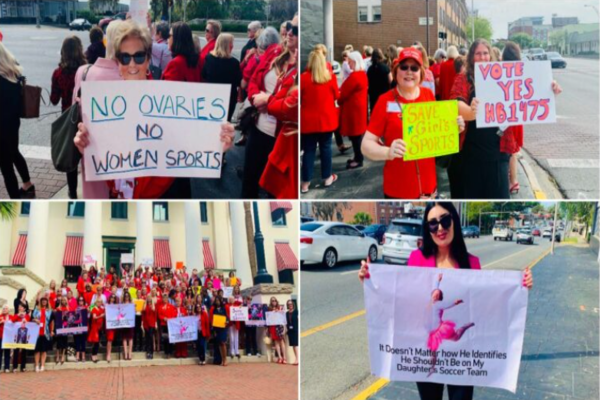 ( bigleaguepolitics ) – The Florida Federation of Republican Women rallied at their state capitol earlier this week in favor of legislation that would ban transgenders from invading student athletics.

“We believe in fairness. The current intrusion of biological boys competing in sports as girls concerns us,” the federation stated in a news release.

“If we do not stand up for girl students, they will be cheated of the opportunity to compete in their chosen sport on a level playing field, cheated of awards for their efforts, cheated of scholarships, and cheated of the joy experienced from having worked to compete and win,” the group added.

The organization was rallying in favor of House Bill 1475, a bill written “to maintain opportunities for female athletes…that result from success in athletic endeavors and to promote sex equality by requiring the designation of separate sex-specific athletic teams or sports.”

“A governmental entity, any licensing or accrediting organization, or any athletic association or organization may not entertain a complaint, open an investigation, or take any other adverse action against any school or public postsecondary institution for maintaining separate interscholastic, intercollegiate, intramural, or club athletic teams or sports for students of the female sex,” the legislation states.

Congressional candidate Laura Loomer appeared at the event to demonstrate solidarity with other strong Republican ladies who are fighting for women’s rights.

“I was proud to stand with hundreds of women from the Florida Federation of Republican Women at the Florida State Capitol in support of HB 1475, because I’m against the Democrats war on women through their transgender invasion of women’s sports,” Loomer told Big League Politics.

“Women’s rights are not up for debate, and neither should the safety of young girls who deserve their privacy in locker rooms and the equal right to be able to compete against other biological women for scholarships, titles and awards in athletics,” she continued.

“This bill will ensure the protection of women, the integrity of women’s sports, and the safety of young girls. I encourage all Floridians and Florida lawmakers to support this bill,” Loomer added.

These Republican women are trying to pressure their lawmakers into standing up against LGBT overreach. In other states, Republican leaders have folded after meeting with lobbyists.

Big League Politics has reported on South Dakota Gov. Kristi Noem caving to special interests and vetoing a similar measure in her state:

“South Dakota Governor Kristi Noem has effectively bowed to the LGBT agenda, gutting legislation that would protect athletes from the ongoing transgender invasion of sports.

“Today, Gov. Noem proposed changes to House Bill 1217 that would eliminate protections for female college athletes outright and gut the ability for all women and girls to have recourse against unfair policies in women’s sports,” wrote ADF General Counsel Kristen Waggoner.

“Her misguided attempt to play politics and placate national corporate interests like Amazon is not what we would have expected from this governor. It’s surprising that Gov. Noem, who once stood up to special interests and corporate woke-ism, has now bowed to them,” she continued.

“Contrary to what she has been told, this bill doesn’t conflict with any national sports policy and is fully consistent with the intent of Title IX. Offering some protection for high-school-girl athletes only delays the injustice they will face once they get to college. We call on the governor to withdraw her recommended changes and sign the bill passed by the legislature,” Waggoner added.

Noem claimed in a letter to South Dakota lawmakers on Friday that she supports the spirit of the legislation but is issuing a “style-and-form veto” because of problematic aspects of the bill’s language.”

Florida has a chance to be a trendsetter and pass a law that would stop transgenders from corrupting the lives of the youth.