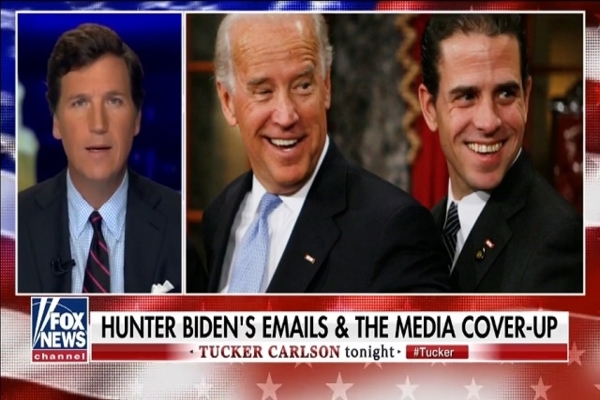 (informationliberation) – Fox News reported Tuesday night that a senior law enforcement official told them Hunter Biden’s emails are “authentic,” the FBI has possession of his laptop and the FBI and DOJ concur with DNI head John Ratcliffe the emails are not part of a Russian disinformation campaign as Democrats have claimed.

The FBI is in possession of the laptop purportedly belonging to Hunter Biden which contained emails revealing his foreign business dealings, including contacts in Ukraine and China, two senior administraiton officials told Fox News Tuesday.

The FBI declined to confirm or deny the existence of an investigation into the laptop or the emails, as is standard practice.

Further, Fox News has learned that the FBI and Justice Department officials concur with an assessment from Director of National Intelligence John Ratcliffe that the laptop is not part of a Russian disinformation campaign targeting Democratic presidential nominee Joe Biden.

Ratcliffe, on Monday, said that Hunter Biden’s laptop and the emails on it “is not part of some Russian disinformation campaign,” despite claims from House Intelligence Committee Chairman Adam Schiff, D-Calif.

Ratcliffe went on to say that it is “simply not true.”

“If you thought it wasn’t possible for Schiff to have any less credibility, DOJ just proved you wrong,” a senior intelligence official told Fox News.

Another senior administration official also told Fox News that the FBI is not currently investigating the laptop as part of a Russian disinformation campaign.

This is further confirmation Democrats and a host of former intelligence officials lied when they claimed this was a “Russian disinformation operation.”

Tucker Carlson documented the extensive Big Tech-backed misinformation campaign from Adam Schiff and others on his show Monday night.

The story the media circulated about some 50 former officials like former CIA chief John Brennan claiming this was all “Russian disinformation” was some of the biggest disinformation of this entire campaign.

Everything our crooked establishment doesn’t like is “Russian disinformation” for Big Tech Tyrants to censor.

BOMBSHELL: Arizona Gets A Stunning Announcement – Trump Is Smiling

BREAKING: Dr. Anthony Fauci Calls It Off – This Is Insane

BOMBSHELL: The War Has Begun – China Throws The First Stone