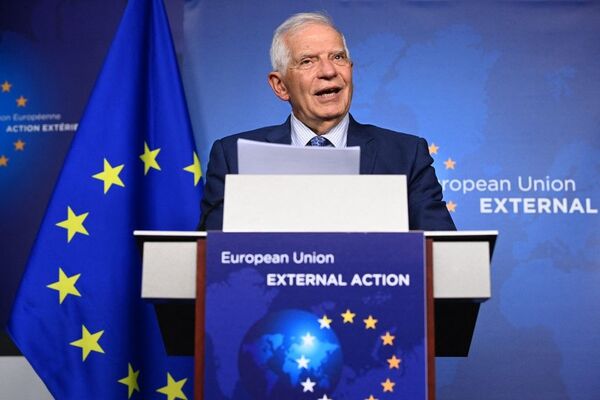 (breitbart) – In another round of escalating rhetoric, the European Union’s top diplomat said that the Russian military would be “annihilated” if Vladimir Putin launches a nuclear strike in Ukraine.

The war or words surrounding the war in Ukraine continued on Thursday, with EU Foreign Affairs Chief Josep Borrell saying that “such a powerful response” would come from the West in response to any nuclear action from Russia, that its military would be wiped out.

Speaking from a European Diplomatic Academy event in Bruges, Belgium, Borrell said: “There is the nuclear threat, and Putin is saying he is not bluffing. Well, he cannot afford bluffing.

“It has to be clear that the people supporting Ukraine and the European Union and the member states, and the United States and NATO are not bluffing neither.

“And any nuclear attack against Ukraine will create an answer — not a nuclear answer but such a powerful answer from the military side — that the Russian army will be annihilated, and Putin should not be bluffing.”

It is not clear who exactly Borrell was speaking on behalf of, given the European Union does not have an army and he holds no formal position in the NATO hierarchy.

The comments from the EU’s top diplomat come amid increasingly heated rhetoric from nearly all parties involved in the conflict.  Vladimir Putin said last month that he would be willing to use “all the means at our disposal” to defend Russia, and further raised eyebrows by claiming that the United States has already set a nuclear attack precedent against Imperial Japan during World War II.

Ukrainian President Zelensky, for his part, response by demanding that NATO to launch nuclear “preemptive strikes” against the Russian Federation in order to prevent them from using their nukes first, though Ukraine later tried to walk back the comments.

While the American public and other world leaders were promised that a Biden presidency would be a ‘return to normal’ in terms of foreign affairs, the 79-year-old Democrat made one of the most bellicose statements from any president in recent memory, warning of a looming “Armageddon” as a result of the war in Ukraine.

“We have not faced the prospect of Armageddon since [President] Kennedy and the [1962] Cuban missile crisis. I don’t think there’s any such thing as the ability to easily use a tactical nuclear weapon and not end up with Armageddon,” Biden said.

This was followed by a top Russian security official, Alexander Venediktov threatening on Thursday that if the Western NATO alliance allows Ukraine into its ranks, it would be a “guaranteed escalation to World War Three”.

While most leaders seem content with the conflict escalating, French President Emmanuel Macron has been one of the few voices attempting to ratchet down the rhetoric, going so far as to say that he would not launch a retaliatory nuclear strike against Russia should Putin attack Ukraine with nukes.

“Our doctrine is based on the fundamental interests of the Nation and they are very clearly defined. If there were a nuclear ballistic attack in Ukraine, these interests would not be called into question,” he said on Wednesday evening.

“We do not want a World War,” the French leader added.

Mr Macron has been joined by former President Donald Trump in calling for negotiations to prevent a World War.

“With potentially hundreds of thousands of people dying, we must demand the immediate negotiation of the peaceful end to the war in Ukraine, or we will end up in World War III and there will be nothing left of our planet all because stupid people didn’t have a clue,” Trump said this week.