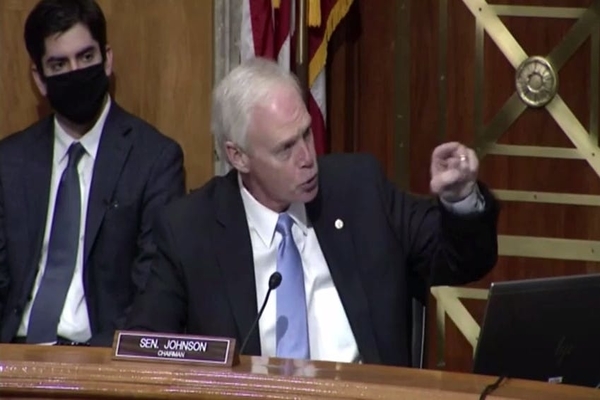 (breitbart) – Senate Oversight and Government Reform Committee Chairman Ron Johnson (R-WI) on Wednesday blasted Democrats for their hypocrisy over election integrity, citing their resistance to accepting the 2016 results and blaming The election’s outcome on Russia.

In his last hearing as chairman, Johnson examined issues of voting integrity in the 2020 election and noted that he has been attacked by Democrat colleagues for simply holding the hearing.

“This hearing should not be controversial. It really shouldn’t be. This is something I think we all should want to restore the confidence in our election system,” he said.

He noted that a large percentage of Americans do not believe the election results are legitimate, which he said is partly the fault of Democrats.

“There are many reasons for this high level of skepticism. It starts with today’s climate of hyper-partisanship, which is only exacerbated by the persistent efforts that delegitimize the results of the 2016 election,” he said.

“The corrupt investigation and media coverage of the Russian collusion hoax reduce faith in our institutions, and the ongoing suppression and censorship [of the] conservative perspective by biased media and social media adds fuel to the flames,” he added.

He also pointed to the establishment media’s suppression of the Biden family’s foreign financial entanglements and its effect on the election. He called it both “amazing and galling” that “all of a sudden, post-election, this has become a news story and a scandal worthy of investigation.”

He said oversight on voting should be bipartisan, but he has only been attacked by Democrats.

“We must restore confidence in the integrity of our voting system…this effort should be bipartisan,” he said. “Unfortunately, Sen. Schumer and Peters ignored my statement and instead chose to politically attack me and this hearing.”

“As I commented in last Thursday’s hearing on early treatment of COVID, close-mindedness is a root cause of many problems we face,” he said.

He said voting irregularities found in the 2020 election “raise legitimate concerns” and “do need to be taken seriously.”

He said fraudulent voting “did occur,” although the conclusion has “collectively been reached” that the level of fraud would not alter the outcome of the election.

But he said that lax enforcement of laws, denying effective bipartisan observation of the complete election process, and failure to have full transparency or reasonable audits has led to heightened suspicion. According to Johnson:

He cited a March 7, 2018, letter sent by Sens. Amy Klobuchar (MN) and Jeanne Shaheen (NH) asking major machine vendors whether they had allowed Russian entities to scrutinize their software.

He also cited a March 26, 2019, letter from Sens. Klobuchar (MN); Mark Warner (VA); Jack Reed (RI), and Gary Peters (MI) that said the vulnerabilities in old legacy machines and newer systems “present a problem for the security of our democracy and they must be addressed.”

Finally, he cited a December 6, 2019, letter from Sens. Elizabeth Warren (MA), Klobuchar, Ron Wyden (OR), and Rep. Mark Pocan (PA) that said they were “particularly concerned that secretive and trouble-plagued companies” owned by private equity firms and responsible for maintaining voter machines “have long skimped on security in favor of convenience, leading to voting systems across this country prone to security problems.”

Now again, those were three letters from Democrat members of Congress. Now, maybe I missed it, but I don’t recall the media or anyone else accusing these eight congressional Democrats of indulging in ‘quackery and conspiracy theories’ or … a ‘ridiculous charade’ as Sen. Schumer did when he used those exact same words attacking me and this hearing on the Senate floor.

“The fact that our last two presidential elections have not been accepted as legitimate by large percentages of the American public is a serious problem that threatens our republic,” he said.

“I do not say that lightly. This hearing is part of what should be ongoing congressional oversight that is meant to transparently address that serious problem,” he said.