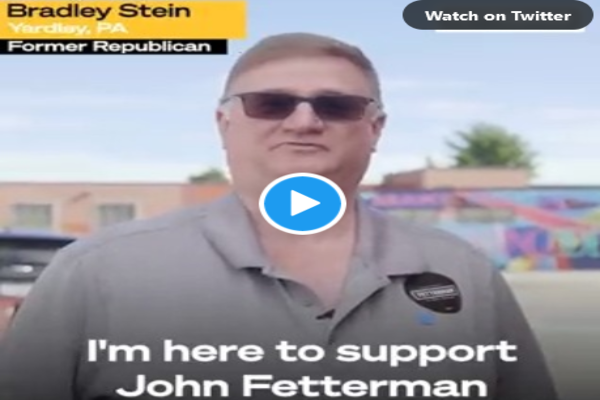 Records show Stein has been a Democrat since at least 2011, contradicting Fetterman’s ad that Stein has recently turned his back on the Republican Party.

Stein claimed in the ad he was a “registered Republican for almost my entire adult life” and became disenfranchised with the GOP after the 2020 election.

But LexisNexis database shows he has been a registered Democrat since 2011:

Moreover, FEC records reveal Stein donated over $10,000 dollars to Democrats well before November 2020. Open Secrets shows Stein has donated been donating to Democrats as far back as 2009 or 13 years ago.

Fetterman’s false representation of Stein’s political persuasion comes as the polls have begun to tighten. Polling from October 12 shows Republican candidate Mehmet Oz within the margin of error.

The polls have been narrowing as voters Fetterman’s health has become a top issue among voters. Fetterman had a stroke in May and has not fully recovered. He appears to still struggle with auditory processing five months later and has refused to release his medical records.

In a recent interview with NBC News, Fetterman had to use a closed captioning device to have a conversation with the network’s reporter.

“[O]nce the closed captioning was on, he was able to fully answer questions throughout that 25-minute interview, which we publish in full online later today,” NBC News’s Dasha Burns reported about her interview with Fetterman.

The Democrat’s mental health is not the only obstacle his campaign must overcome. Fetterman is one of the most radical Democrats in the 2022 cycle. He has called to ban the “ownership” of rifles, a step further than simply banning the sale of rifles.

Fetterman believes it is “important that we as a society” provide government-funded drug dens, and also decriminalize drugs “across the board,” including meth and heroin. He has supported ending cash bail.

In 2018, Fetterman advocated for arresting criminals another day if they run away from police.