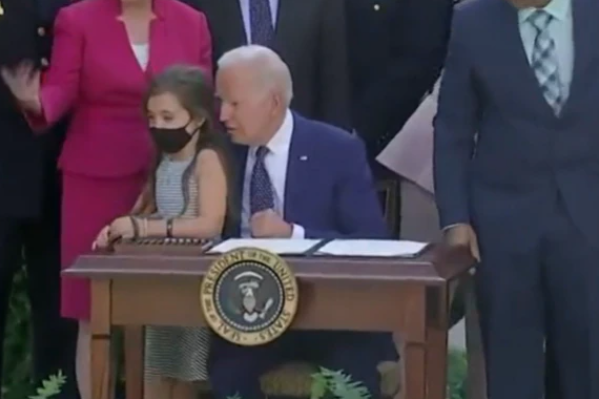 (bigleaguepolitics) – President-imposed Joe Biden has generally done a good job of not groping little girls publicly since being installed into power…until now.

During a signing ceremony of legislation at an outdoor event, Biden signaled for a nearby little girl who approached his desk and started smelling and groping the child who couldn’t have been older than age 8.

The disturbing video can be seen here:

While Biden is most widely known for grabbing and sniffing children, he has also reportedly groped women of legal age as well, which allegedly resulted in the pervert getting punched by a Secret Service member.

Big League Politics reported on accusations of Biden getting very touchy-feely with the wives and girlfriends of Secret Service members until one man had enough:

“Judicial Watch is suing to get information regarding an alleged impropriety regarding Democrat presidential candidate Joe Biden and a secret service agent.

The foundation filed a Freedom of Information Act (FOIA) lawsuit with the Department of Homeland Security for records that have supposedly been destroyed about the incident. Judicial Watch wants access to the records if they exist or to understand why they have been destroyed if that is in fact the case.

The allegations come from a Gateway Pundit article by journalist Cassandra Fairbanks originally published in 2017. The article details Biden’s alleged groping antics around women, which reportedly got the former vice president into a heated situation with a secret service agent.

“We had to cancel the VP Christmas get together at the Vice President’s house because Biden would grope all of our wives and girlfriend’s asses,” an agent told Gateway Pundit under the cover on anonymity.

“He would mess with every single woman or teen. It was horrible,” the agent added.

The secret service agent also claimed that Biden used to strut around in the nude all the time.

“Agents say that, whether at the vice president’s residence or at his home in Delaware, Biden has a habit of swimming in his pool nude,” Kessler wrote. “Female Secret Service agents find that offensive.”‘

Old habits die hard, and the commander-in-chief is reminding the world yet again why he earned the nickname “Pedo Joe.”