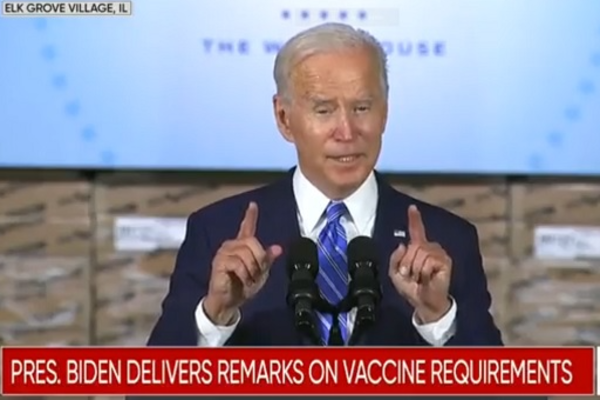 Schwerin is Hunter Biden’s business partner who visited the White House 27 times between 2009 and 2016, according to reported White House visitor logs. Both Hunter and Schwerin managed Rosemont Seneca Partners, which has been linked to corrupt business dealings that entangle Joe Biden, the Republicans say.

Schwerin reportedly met with then-Vice President Joe Biden once in the White House, and with his Chief of Staff Steve Ricchetti at least nine times. Ricchetti currently serves as President Biden’s White House counsel, and was Biden’s chief of staff from 2013 to 2017.

The Republicans requested in writing that Schwerin come clean about “him receiving and facilitating the transfer of then-Vice President Joe Biden’s tax refund check to Hunter Biden,” the press release stated.

The Republicans questioned “how much money President Biden owed his son and what role his son played in managing the President’s finances.” They also requested “information regarding the transaction and any other instances of President Biden owing money to Hunter Biden.”

The congressional letter to Schwerin reads:

On June 10, 2010, an email from you to Hunter stated: ‘Your Dad’s Delaware tax refund check came today. I am depositing it in his account and writing a check in that amount back to you since he owes it to you.’ This email shows an intertwined financial relationship between President Biden and his son, the latter of whom has profited from America’s losses to foreign adversaries. The Obama-Biden Administration’s subsequent nomination of you as a member of the Commission for the Preservation of America’s Heritage Abroad further complicates the Biden family’s private and public dealings. If President Biden and Hunter are sharing funds or if President Biden is in debt to his son—the American people deserve to know it especially in light of the millions of dollars Hunter’s businesses have received from countries adversarial to U.S. interests.

“I have never spoken to my son about his overseas business dealings,” he said in 2019. On Tuesday, White House press secretary Jen Psaki dismissed Schwerin’s visits to the White House as “visits from more than ten years ago.”

Follow Wendell Husebø on Twitter and Gettr @WendellHusebø. He is the author of Politics of Slave Morality.