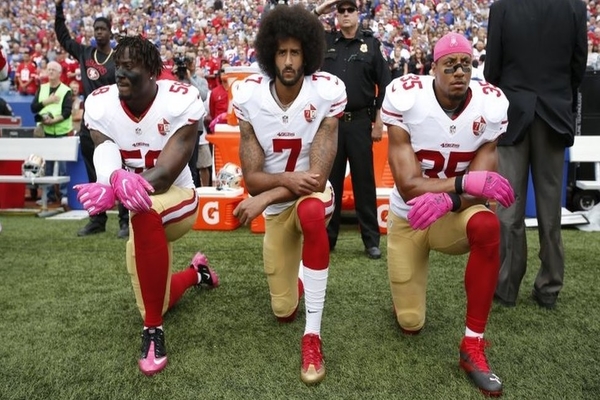 (breitbart) – Former NFL quarterback Colin Kaepernick has downsized his expectations and now says he would accept a backup quarterback job just to get his foot back in pro football.

During an episode of I AM ATHLETE, Kaepernick spoke to ex-NFL players Chad Johnson, Adam “Pacman” Jones, and Brandon Marshall. During the podcast, the national anthem protester spoke about his dimming hopes about returning to the league.

During the discussion, Marshall asked Kaepernick if he was willing to come back in a backup role as opposed to being a starter, TMZ Sports reported.

A candid Kaepernick said that he absolutely would consider that.

“I know I have to find my way back in. So, if I have to come in as a backup, that’s fine,” Kaepernick told the hosts.

“But that’s not where I’m staying. And when I prove that I’m a starter, I want to be able to step on the field as such. I just need that opportunity to walk through the door,” he added.

Kaepernick has been working out with NFL receivers in an attempt to show he can still play.

Kaepernick, of course, is more famous for his protests against America, his proclamations that the NFL is akin to “slavery,” and his attacks on police than he is for playing football.

And he hasn’t played since the end of the 2016 season after he spent a year taking a knee during the playing of the national anthem.

But it should also be remembered that Kaepernick is right now not playing pro football because he turned down every opportunity he was offered.

Kaepernick turned down an off from the San Francisco 49ers to stay on the team in 2017 because he wanted more money. He turned down several opportunities after that, too, not to mention his act of making a circus out of the NFL’s workout offer in 2019.

If Kaepernick hadn’t gotten greedy, he would likely have continued his NFL career in 2017.