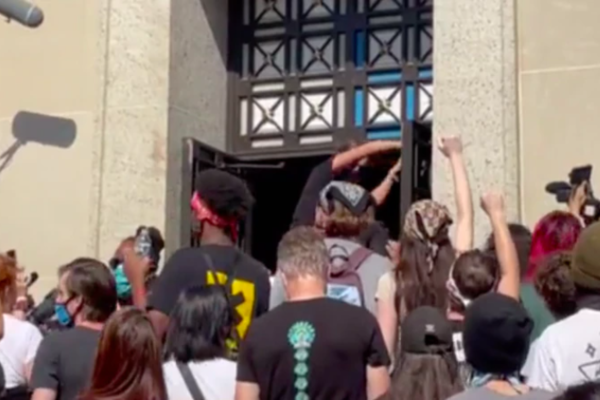 (bigleaguepolitics) – Left-wing extremists attacked the offices of the Department of the Interior on Thursday, demanding the cessation of use of all fossil fuels in the world.

A mob attacked one door that was left unlocked at the Interior headquarters in the Washington DC neighborhood of Foggy Bottom, with police forced to keep the crowd from storming the building. Scenes at the government building resembled some of the events that took place at the January 6th riot at the US Capitol.

The extremists are demanding that President Joe Biden cease approvals for any new natural gas and oil projects in the country. Gas prices have already skyrocketed to new highs, with middle-class Americans paying as much as 60% more for an essential of daily life.

At one point, extremists were met with the use of taser devices by police protecting the building.

Ecoterrorist extremists represent one of the most dangerous variants of extremists in the United States, with convictions for acts of violence and sabotage occurring on a yearly basis. Two organizers of the Washington Democratic Party are currently on trial for an alleged plot to derail trains carrying materials for the construction of a pipeline in Canada.