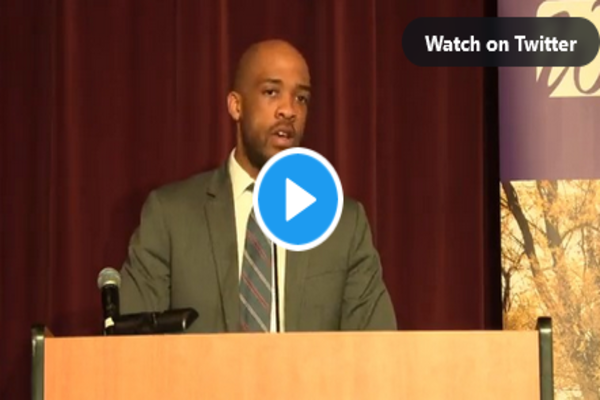 “We’re still waiting for our moment for America to be great,” he said. “We still don’t comprehend that campaign slogan because it is meaningless to us as a community.”

“It’s meaningless to us as a race,” he added, speaking to black attendees of the University of Wisconsin.

The citizens of the United States have achieved great success in just over 200 years as a nation. The successes include creating the Internet, defeating Germany in WW1 and WW2, inventing automobiles, flight, and sending a man to the moon.

It is not the first time Barnes has bashed the nation in which he holds public office as Lt. gov. of Wisconsin. Barnes has suggested many times the founding of the United States is rooted in racism.

“Things were bad,” Barnes said in 2021. “Things were terrible. The founding of this nation? Awful.” He added:

But you know, we are here now. And we should commit ourselves to do everything we can do to repair the harm because it still exists today — the harm the damage — whether it was colonization or slavery. The impacts are felt today. And they are going to continue to be felt unless we address it in a meaningful way.

Barnes has gone so far as to criticize national parks as a part of the systemically racist fabric of America because the “parks are on land that was indigenous.” He claimed:

It’s important to create more welcoming spaces because things haven’t always felt welcome. And that’s historical, just that perspective, given the fact that national parks weren’t made for the enjoyment of people who weren’t white. National parks are on land that was indigenous.

Barnes has even used the theory of global warming to push for “equitable and inclusive” measures to end the “long pattern of environmental racism we have witnessed in this country.”

“I liken [CRT] to learning about science – like this is what it is, and people should know about it,” Barnes stated in 2021 about school curriculums. “My response is, you know, are you that ashamed of reality or that ashamed of the history that you want to make it [CRT] illegal for people to learn about it?”

Barnes is campaigning against Sen. Ron Johnson (R-WI), who is leading in the polls by about four points. The midterm election is 41 days from Wednesday.