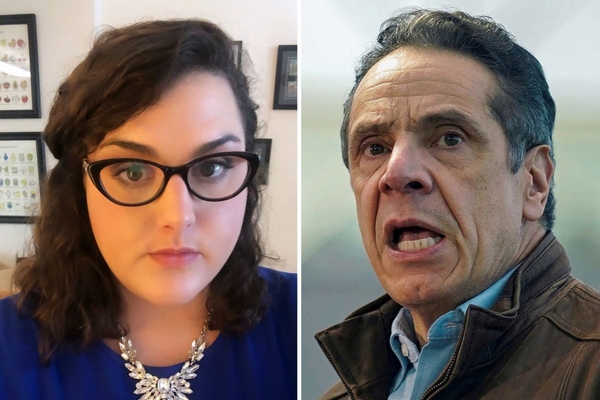 Bakeman broke her silence about Cuomo in an essay published in The New Yorker on Friday, alleging that the governor placed his arm around her shoulders during a party at the Executive Mansion in 2012.

“He left it there, and kept me pinned next to him, for several minutes as he finished telling his story,” Bakeman, now an education reporter for Miami’s WLRN, recalled. “I stood there, my cheeks hot, giggling nervously as my male colleagues did the same. We all knew it was wrong, but we did nothing.”

In another instance, Bakeman alleges that the governor held her body tightly while she said goodnight at a holiday party in 2014.

“He took my hand, as if to shake it, then refused to let go,” she recalled. “He put his other arm around my back, his hand on my waist, and held me firmly in place while indicating to a photographer he wanted us to pose for a picture.”

According to Bakeman, Cuomo’s behavior toward her was not about sex but rather exerting “power.”

“He wanted me to know that he could take my dignity away at any moment with an inappropriate comment or a hand on my waist,” she wrote.

“The way he bullies and demeans women is different,” she added.  “He uses touching and sexual innuendo to stoke fear in us. That is the textbook definition of sexual harassment.”

“The repeated accusations against the governor, and the manner in which he has responded to them, have made it impossible for him to continue to govern at this point,” Nadler said in a statement.

However, Cuomo defied New York Congressional Democrats’ call for him to step down, instead declaring himself a victim of “cancel culture.”

“There are facts and then there are opinions. And I’ve always separated the two,” a defiant Cuomo told reporters. “Politicians who don’t know a single fact, but yet form a conclusion and an opinion, are in my opinion reckless and dangerous.”

The people of New York should not have confidence in a politician who takes a position without knowing any facts or substance. That, my friends, is politics at its worst,” the governor added. “People know the difference between playing politics, bowing to cancel culture, and the truth.”

“The reports of accusations concerning the governor are serious. The committee will have the authority to interview witnesses, subpoena documents and evaluate evidence, as is allowed by the New York State Constitution,” said Heastie. “I have the utmost faith that Assemblymember Lavine and the members of the committee will conduct an expeditious, full and thorough investigation.”

Heastie noted the review will not interfere with New York Attorney General Letitia James’ (D) independent investigation of the allegations against the governor.

BREAKING: Top RINO Gets Bad News – This Is HUGE