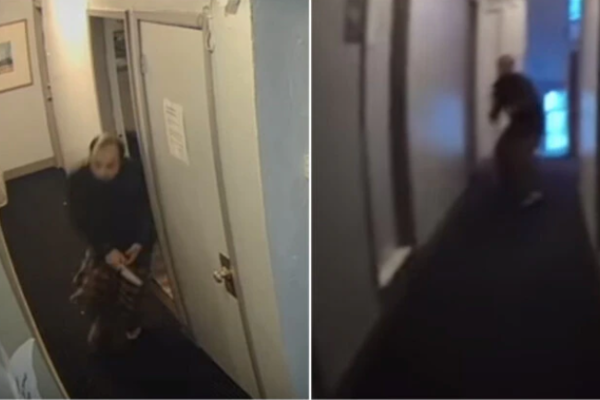 (bigleaguepolitics) – A former Afghan interpreter resettled in California by the federal government was shot and killed last week after charging San Francisco police with a butcher knife and chanting “Allahu akbar.”

In bodycam and surveillance footage, 41-year old Ajmal Amani can be seen rushing two police officers with a knife at a residential hotel in south San Francisco. The Afghan citizen can be clearly heard yelling the Islamist phrase in the bodycam, a development that suggests a terrorist motive in the attack.

Watch footage of the shooting here, which occurred after hotel guests and employees reported being threatened by Amani with the knife. One officer fired a non-lethal weapon at the charging Amani, before his partner fired four rounds from a firearm at the imminent threat.

“As Mr. Amani closed the distance, officer 1 and officer 2 fired their respective weapons, striking Mr. Amani. Mr. Amani fell to the ground with the knife nearby him,” a San Francisco Police Department spokesman said of the shooting.

Amani’s lawyers have described the man as a former interpreter employed by the American military in Afghanistan. Amani was provided resettlement privileges in the United States at some point prior to 2019, facing criminal charges for stabbing a park ranger in California that year.

San Francisco public defender Scott Grant is describing Amani as mentally ill from effects of PTSD, although his religiously charged language before attacking the police officers suggest that the incident may have been more than temporary insanity.

Some estimates count as many as millions of War on Terrorism veterans as suffering from PTSD, but veterans of the armed services are unlikely to engage in violent crime as seen in the case of Amani.

The disturbing and potential terrorist attack comes amid revelations that President Joe Biden’s government imported nearly a hundred thousand Afghan migrants from the country in the midst of its capitulation to the Taliban without so much as interviewing the migrants for security considerations.